on July 16, 2020
The Promise- Katerina Diamond
Found in donation library at supermarket
Donation given
After my book binge during lockdown I’ve been carrying on reading as much as I can after work and recently finished another great one; The Promise from Katerina Diamond.
If I’m being honest I wasn’t expecting much, the synopsis leaves little to be desired but I wanted to give it a go anyway and boy, was I wrong!
The book centres around 3 main storylines; Devonshire police DS Imogen Grey and DS Adrian Miles who are hunting a possible serial killer who lures vulnerable women onto dates before murdering them. Connor and his dad Jacob have moved from California to Devon in the hopes of forgetting Connor’s dark past and finally, the mysterious diary of an unnamed woman pops up every few chapters and tells the tragic story of her life at the hands of her abusive ex-partner and conflicted new husband who is unable to choose between his one best friend and his own wife.
While reading I couldn’t see how these three story lines came together (no matter how hard I tried to imagine my own version of events) until things began falling into place, characters began to meet each other and stories began to merge together, only then did I realise how impressive the story-telling of the novel is. It’s not a very long read but still manages to drag you along for most of the book before it all kicks off in the last 40 pages, I honestly couldn’t put this book down and had it finished in a couple of days!
There are some warnings I feel I must add, if you’re uncomfortable reading about murder, rape, sexual/physical assault as well as violence towards children I would maybe give this a miss, these subjects are spoken about widely but in a very mature and realistic way, in no way are they romanticised but some points are very graphic and may upset readers who feel uncomfortable in these subjects. 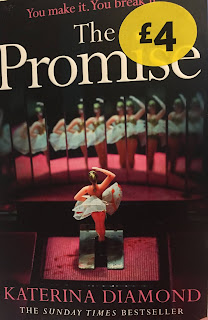 Diamond is a masterful author and I will definitely be searching for her other books! The Promise is actually the 4th book she’s written and was published in 2018. I would like to read her first book; The Teacher which looks at Imogen and Adrian trying to solve a string of gruesome deaths within a tight-knit community, but they soon realise these deaths are closer linked than they originally thought. That one sounds like a really good read for a cosy, stormy night!
Another book of Diamond’s is her most recent book The Heatwave (published in 2020) which describes a killer within a small community in the height of summer and one girl who is hiding what she knows.
Let me know if you've read any Katerina Diamond books and what you thought of them!
H x
Book Review Books Charity Shop Buys Eco Friendly Sustainable Buying Thriller