on July 08, 2020
Worthing, Barbados
29/08/2019- 12/09/2019
Time to explain my favourite travel destination of 2019 and the island that my heart calls home. Obviously I’m from the U.K and not from Barbados BUT that doesn't mean I don’t have a special connection with this beautiful island in the Caribbean. I’ve been lucky enough to travel here twice now and even though the island ever seems to change I still don’t tire of the views, nature or the wonderful people. I stayed in an area called Worthing for 2 weeks with my parents in a small but lovely hotel, although the hotel may not have been “fancy” it was the silky sand on the (private) beach, crystal clear warm sea and the enormous stack of blueberry pancakes every morning that made this hotel top of the range!
I also just want to point out that none of these photos are edited or changed, the island just really is this perfect. 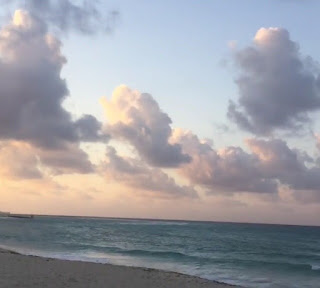 Something that was unexpected and a highlight of this trip was seeing baby turtles hatch on our beach every morning (being awake before 6 a.m because of jet-lag did actually come in handy). The turtles would wriggle out the sand very early just before the sun came up so they could try and hide from birds and crabs and then muscle their way to the sea, unfortunately some didn’t make it but the ones who were stuck and still alive I very quickly and gently picked up and moved to the shoreline; I’m aware some people may say it’s wrong to interfere or touch them as they’re so new-born but there were literally hundreds and I wanted to make sure as many as possible got a chance. After a couple of days of this the hotel called the island’s turtle rescue team who came and picked up the majority and moved them to a secluded protected beach where no humans could interfere and they could make their way from there, it was really special to see this little natural marvel with my own eyes and it’s something I won’t ever forget. 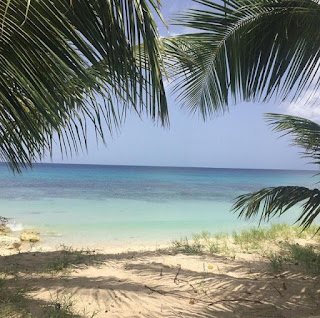 About halfway through the holiday we paid a visit to the Barbados Wildlife Reserve. If you’re an animal/nature/plant lover like myself then this little reserve in St Peter is the place to go! This was the second time we’d visited this place and to me it’s one of the must see attractions of Barbados; my dad refers to it as a “wonderland” and it truly is, the reserve is VERY open meaning that there are only a few enclosures mainly for birds, large reptiles and small mammals, the rest of the inhabitants; which includes a huge pack of Green Monkeys (that steal from the banana plantation next door), Brocket Deer, Maras, Iguanas, Parrots and almost 100 Tortoises all roaming around the stony hills of the reserve with you. If you go to the reserve for around 2PM you will be there for feeding time during which the keepers dump two wheelbarrows full of fresh fruit and veg onto the ground and every animal in the reserve comes over and feeds together, it’s like something out of a film and really special to stand amongst the animals as they all crowd round to have lunch. I promise it will be a highlight of your holiday! 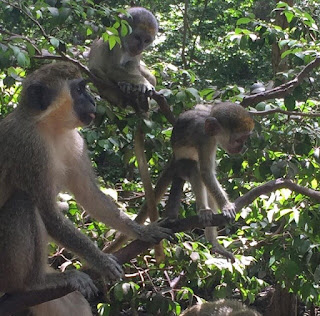 On our second to last day we took a trip to Harrison’s Cave which is synonymous to Barbados as one of it’s biggest attractions. This natural phenomenon is 200ft underground, the caves have been made completely accessible as the owners have carved a tarmac road throughout and visitors are driven around in awesome golf buggys! With stalactites and stalagmites hanging from the ceiling and poking up through the ground all made of thousands of years old rock, it was an incredible experience, the guide even showed us where a new archway was being formed by the calcium-rich water dripping onto the floor and creating new stalagmites, he said if we’re all not busy in 200,000 years we can come back and see the brand new archway! The underground world also has natural pools, some clean enough to drink straight from the ground and some so toxic you’d be dead in a few hours (we were encouraged to not touch any of the pools). The stories that the guides told about early-man being found within these caves and the animals that have been preserved here was astounding not to mention the golf-buggys were a really cool way to whizz around! If you’re looking for somewhere fun and accessible for the entire family, you should definitely give Harrison’s Cave a visit. 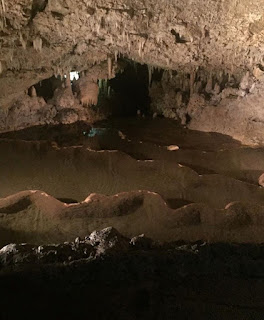 I always get an empty feeling when leaving Barbados, knowing I’m leaving behind the wonderful community and the nature I love but I know I’ll always return when I can. In the meantime another Caribbean island I would to visit is The Bahamas but specifically to go and see Pig Beach! Please let me know if you've been or live near there and give me some more ideas!
H x
Adventure Barbados Caribbean Nature Travel Travel Diary Vegetarian