Half Of A Yellow Sun

Chimamanda Ngozi Adichie
Found in supermarket charity library
Just gave a donation
I just finished another great book! This one I was really excited to read as it’s from an author I’ve heard so much about but never read anything by. Chimamanda Ngozi Adichie. This influential, feminist genius of an author has created countless writings and novels around not just African culture but women in African culture and a woman’s place in our world, and has appeared in a Beyonce video or two. This was a lucky find at a supermarket donation library for me and I’m so glad I picked it up.
The novel is covered in great reviews from publishers and critics all saying that Half Of A Yellow Sun will soon become a literary classic, and I completely agree. As someone who actually enjoyed English classes at school, I think we would have all benefited from this book far more than certain other classics (I’m looking at you Shakespeare) as this teaches about an altogether truly horrific moment in Nigeria’s history that was never spoken about in my history classes let alone critiqued within a novel.
The book centres mostly around Ugwu; a young man from a local village who gets the chance to become a houseboy within the interesting home of Odenigbo, we are taken on a journey to watch Ugwu perform his duties to his masters as well as trying to get a handle on his own life and where he must be when the war hits. Odenigbo is an educated and passionate teacher at a university and his wife Olanna is just as educated but seems to struggle to be taken seriously because of her natural beauty and father’s esteemed position within Nigerian businesses, alongside them stand Kainene who is Olanna’s fiery twin sister, the heir to their dad’s oil companies and an absolute savage to the men that circle her. There is also Kainene’s partner Richard, an Englishman that has found his true home within Biafra as well as the life he’s always dreamed of with Kainene, but Richard is often seen as an outcast due to his British roots and many members of the community are wary of him and his relationship with Kainene.
The characters live their lives trying to look out for one another when a civil war breaks out that kills hundreds of thousands of innocent Igbo tribe civilians as well as hundreds of thousands of soldiers caught up in the war, the air raids and battles cut off this family into a newly formed country; Biafra. This country seems to be a haven for these characters as they try and re-build a broken society but it soon turns into disaster as they realise they can’t hold on to their new land much longer. 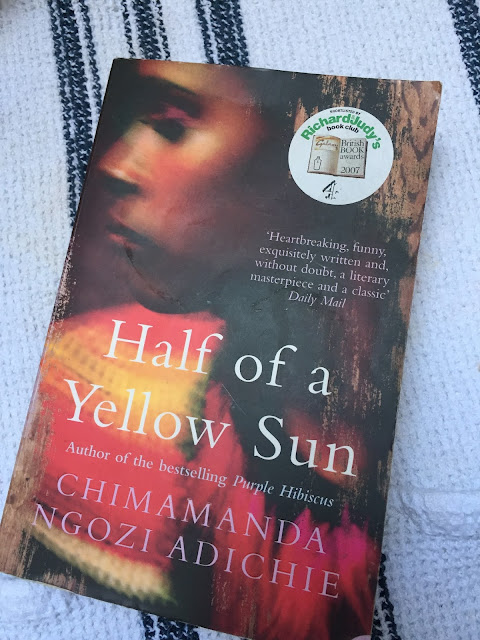 I would love to read another book by Adichie, her most recent book that came out in 2017 is Dear Ijeawele, Or A Feminist Manifesto In Fifteen Suggestions. This book is essentially a back-and-forth of emails about the importance of feminism that was turned into a novel. I’m always interested to read about peoples opinions and ideas on feminism so I’ll try and hunt this one down.
I really think Half Of A Yellow Sun is so important for everyone to read, not just to educate yourself on Nigeria’s history but also to immerse yourself within Adichie’s writing and appreciate the true history she is able to tell through an inherently fictional book.
H x
Book Review Books Charity Shop Buys History Sustainable Buying