26/02/2020- 28/02/2020
This will be the last travel diary for a while as I’ve run out of recent holidays to talk about!! I know…I’m sad too but hopefully it’ll be safe to travel again soon as we’ve got some pretty big plans for next year!
Anyway, in February we were still trying to come to terms with our huge holiday to America, so I was so surprised when my boyfriend said he’d booked us a short break to Amsterdam for my birthday. I’d been saying for a while that I’d like to go but I wasn’t sure when, but little did I know it was all being secretly arranged without me!
We flew from Luton airport to Amsterdam, I’m terrified of flying but had been told that this flight didn't last long (I didn’t believe it) so when after only 45 mins in the air the pilot announced we were coming into land, I was the happiest I’ve ever been on a flight! It was so easy and stress free for someone like me that internally panics for the whole flight, so if you want a quick flight, Amsterdam is definitely the destination. So we landed and found our airport transfer to the hotel (the transfer was a lovely leather interior mini-van Mercedes with blacked out back windows and a partition between us and driver…I felt like Beyonce). We arrived at Motel One, a super modern hotel with a lovely bar to match. We found our room and put our cases down before we headed out for the afternoon to explore some of the city! We headed straight to Dam Square which is the main touristy part and just had a look around the bars and cafes. This picture was right outside our hotel…people weren’t kidding about the Dutch loving their bikes! 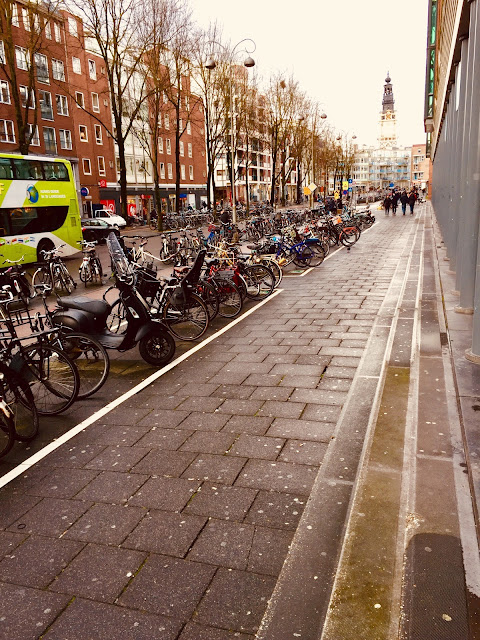 We had a walk over the bridges and canals which was very romantic despite the rainy weather and then made our way back to Dam Square for an infamous tour of The Red Light District. I have to say that you weren’t actually allowed to take any picture for obvious privacy reasons but it definitely opened my eyes to a lifestyle I’d never seen before! The tour lasted about an hour, we were so lucky as our tour guide had been expecting about 6 people but it turned out only myself and my boyfriend turned up because of the rain! So we ended up having a private tour of central Amsterdam, it was very interesting and about much more than just The Red Light District, we learnt all about the history of the city as well as how weed became so popular in the city and not just with tourists! After we finished the tour we met up with a really good friend and had some very overpriced G&T’s in a sports bar before heading back to the hotel for a well deserved rest before my birthday tomorrow! 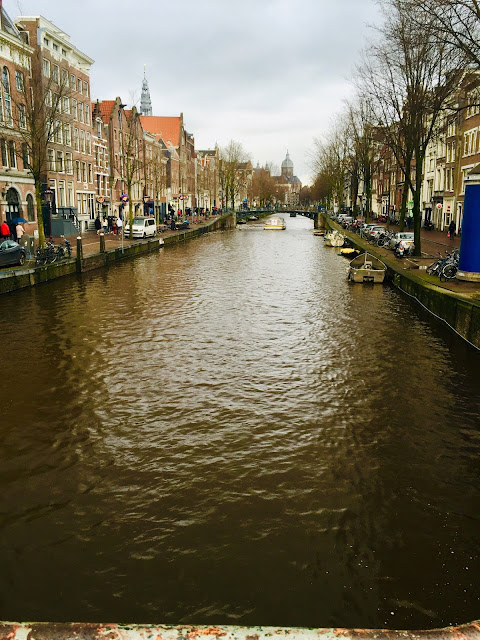 My birthday was finally here! Every year is exciting for me, I never grew out of that childhood excitement especially when I’m in a new city as well! We woke up and my boyfriend got dressed and rushed out of the hotel before I could ask where he was going?! 15 minutes later he’s back with a bottle of champagne and some chocolate for a boozy birthday breakfast! That was really thoughtful and I was very grateful for these constant little surprises, After we’d finished the bottle we took a brisk walk back to Dam Square to visit Amsterdam Palace, this beautiful building is still home to the dutch royal family but is now also a well looked after historical building for everyone to enjoy. Patiently waiting outside the palace was a beautiful horse attached to a carriage, we don’t necessarily agree with using horses for things like that nowadays but we still went over and gave them a pat, they were doing very well keeping calm with the crowds and the rain. 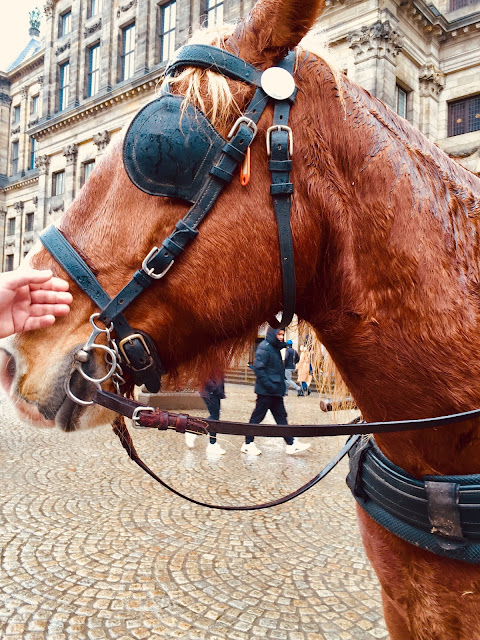 Inside the palace was like nothing I’d ever seen before, every room was adorned with expertly carved stonework and marble features, in the main ballroom was an enormous room-wide map of the world etched into the marble flooring and above was Atlas, holding up the earth over your head. We went to go and look into one of the recreational rooms and saw the artwork on the wall outside and couldn’t ignore it, carved into the stone was an intricate artwork of violins, sheet music, wind instruments and harps, it took me a moment to realise that someone really had made this with their own hands! 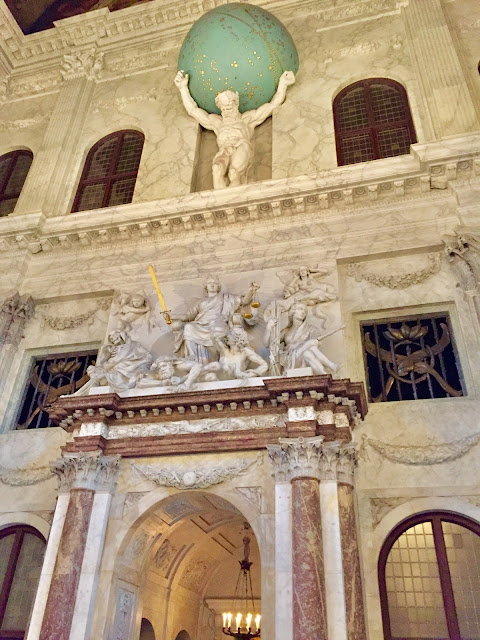 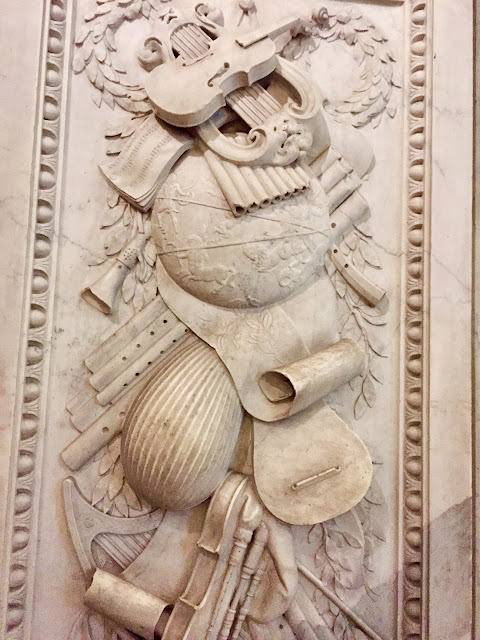 After our walk around the palace we stopped for some lunch at a Chinese restaurant before going back to the hotel for a nap as we had a big evening ahead of us. Once the evening rolled around we took another stroll along the canals to get to a little jetty where a riverboat cruise was waiting for us! The cruise was gorgeous, it took us all around central Amsterdam, through even the most narrow of canals, underneath mechanical bridges and even through “the seven bridges” a beautiful sight of a long row of bridges all lit up at night with pretty lights, locals say it’s their version of Venice. After the cruise had finished it dropped us outside The Hard Rock Cafe, anywhere we go I have to make sure there’s a Hard Rock Cafe, as I love to collect the T-shirts! We had a huge meal with delicious dessert and waddled back to the hotel to bed. It was a lovely birthday and certainly one I won’t forget.
Unfortunately we had come to our last day, at least our flight wasn’t until the evening so we had the whole day to enjoy everything we could fit in. A trip to any new city means we have to check out their zoo or parks, Amsterdam zoo (ARTIS) is absolutely beautiful, the animals we saw were happy and healthy and there was so much to see! The zoo consists of unique old-style Dutch buildings that have been made into enclosures, zoo office buildings and education centres, there is a real sense of modern style with how the animals are looked after but set in an antique design. 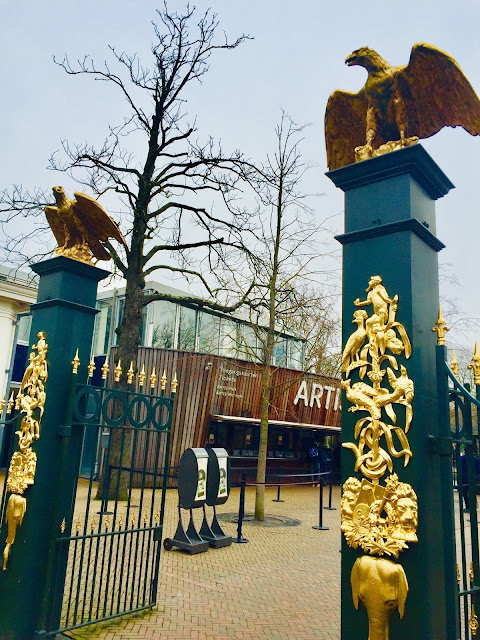 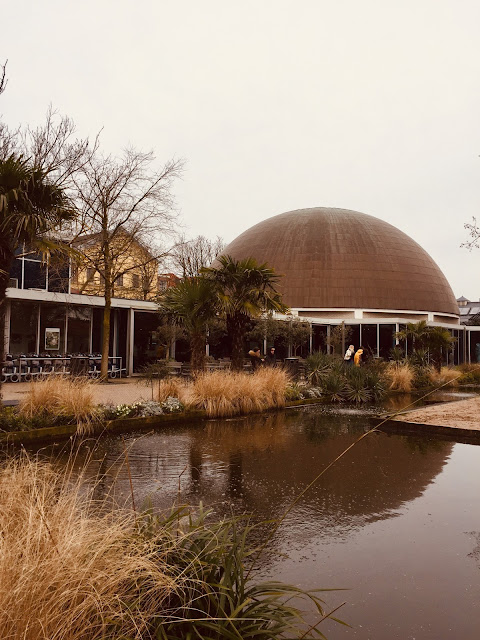 My favourite part of the zoo was the lions, I expected to see them altogether but the male had been separated for the time being and was happily playing with a ball waiting for his lunch. When myself and my boyfriend came over to the glass he let out a huge yawn and pressed his nose right up against the part of glass that I was leaning on! I’m sure it wasn’t a sentimental moment and really he was sizing me up for an extra lunch but it was really special just the same. We spent pretty much all day there, took one more walk to Dam Square before getting our luxurious transfer back to the airport. 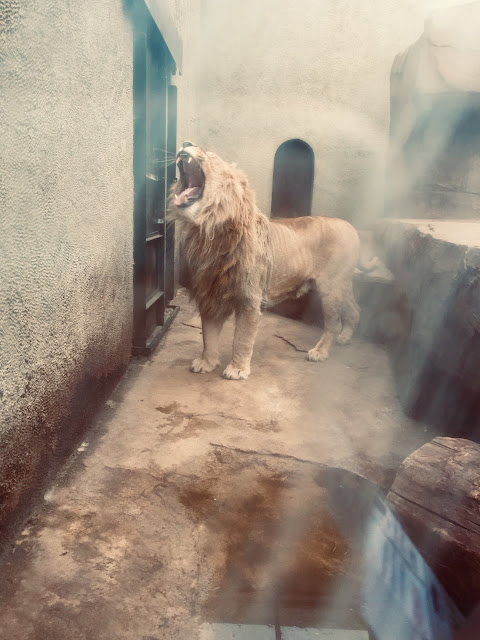 We were sad to leave, even though we had a great time we felt we’d only scratched the surface of Amsterdam and there was so much more to see! We would love to go back again to see the zoo but also to go into so many of the interesting and weird museums that they have, so hopefully we’ll get to go back at some point and finish off our exploring!
H x
Adventure Amsterdam Animals Europe History Travel Travel Diary