I’ve finished another James Patterson classic and yet again I wasn’t disappointed. Private Vegas is the fourth book in a series of six based around Jack Morgan; the owner of a widely successful Private Investigation company in Los Angeles. Private Vegas centres around a spate of arson in the Hollywood Hills involving supercars belonging to the rich and powerful, Jack begins to think this may not be some teenagers playing a game but could be a message from someone who would prefer he wasn’t around anymore. This message takes Jack to Las Vegas to find information on some very unsavoury people and things begin to get out of hand…fast.

Throw in two very shady characters from abroad, a few love interests, and some big plot twists, I guarantee you will fly through this book just like I did.
James Patterson never fails to disappoint with his fast-paced writing and constant twists and turns, the chapters are very short which means you’re left constantly on edge every 3-4 pages.
The storyline itself is really interesting, there are quite a few characters (as with all James Patterson’s books) but somehow he makes it very easy to keep up with them all as well links them all together in their own little ways, this only makes the plot more exciting as you wonder what a character is up to when they haven't been mentioned in a while. Private Vegas has a wealth of 'love to hate' characters that keep you constantly waiting to see when/if they’ll be caught out but not all of them get the ending they deserve!
The main things that I loved about this book were the locations. Anyone who has met me for more than 10 minutes will have been subjected to a story of our holiday to Los Angeles and Las Vegas in January 2020 (sorry to everyone who has had to sit through my TED Talk of a holiday), but this book is based in those locations! I was recognising all the road signs and highways that were being described as well as some of the restaurants and buildings, it meant I was even more engrossed in the book now I have actually seen these locations in person, the moment that tied this book together for me was when two characters were having dinner in a huge skyscraper hotel in Las Vegas…it was the exact hotel we stayed in! I couldn’t believe it and it just made me love the book even more now that I have this personal connection with it. 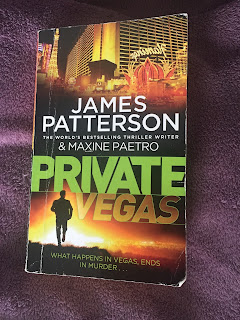 Because I only buy my books from charity shops I can't really collect an entire series of books in one go, so I’m having to just collect James Patterson books as I find them, which has been really fun actually. So far I’ve read two and I’m currently reading a third one! Obviously, the way I’m reading them they're in no particular order but that’s ok because most of Patterson’s books don’t follow on from one another anyway, they might just feature the same main characters but in totally different scenarios.
I honestly think James Patterson books are good for anyone aged 16 or up and they’re an easy read both in book size and content if you don’t read much or don’t get a lot of time to read you can just dip in and out of his books pretty easily (but I guarantee you won’t) and still enjoy them all the same. If you ever see a James Patterson on a shelf, don’t leave it behind!
H x
Book Review Books Charity Shop Buys Eco Friendly Sustainable Buying Thriller