I just finished a type of book I wouldn’t normally read if it wasn’t for the cover…I know they say don’t judge a book by its cover but when you see it I think you’ll agree it’s worth taking home!

The Rosie Project isn’t a book I’d typically read it's more of a rom-com and I’m into horror, crime/thriller books so I wasn't even sure I’d like it but it was great!
If you’re a fan of The Big Bang Theory then this book is for you, the main character Don Tillman is Sheldon Cooper in book form. Don lives a very calculated life focused on strict time management and efficiency in everything he does (if it’s gonna add an extra 3.38 minutes onto his daily routine, he doesn’t wanna know about it!). Out in the ‘real world’, he struggles to form lasting friendships with anyone but particularly relationships with women so he decides the best way to find a wife is to create a scientific questionnaire with some strict criteria; the women with the most points are the most compatible, simple! In doing this he meets Rosie, a woman who is the direct OPPOSITE of everything he is looking for but hey, don’t opposites attract?…maybe?
The book was really funny but very heartfelt at the same time, I would say it’s good for anyone aged 16+ as apart from some painful backstories and crude characters there’s nothing overly graphic or upsetting (which makes a change from my usual reading). 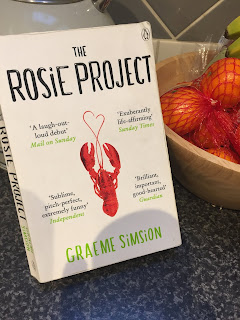 If you enjoy The Rosie Project and want more, Graeme Simsion’s got you covered, he released a sequel in 2014 to The Rosie Project called The Rosie Effect which just kind of follows on from the first, I don’t know if I’d jump to find it only because I do still really love reading horror and crime but if I found it in a charity shop then I think I might take it home.
If you want to cosy up with a book where you can really emotionally invest in the characters and maybe just re-think the way you see others, then The Rosie Project is the perfect next read for you!
H x
Book Review Books Charity Shop Buys Eco Friendly Sustainable Buying