I was really excited to get round to this book just in time for October, I found it in a charity shop for £1.50 on a bookshelf called “rare books”, now, I looked this book up on eBay thinking I might have discovered a gem and it's worth about £15 so…no. But, it’s a slightly different kind of book to what King usually creates and it was interesting nonetheless. 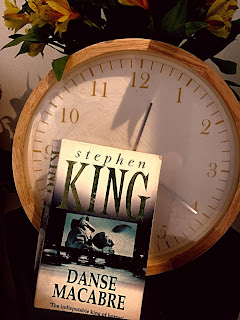 Danse Macabre is more of a non-fiction essay by Stephen King about his take on some of the most important works of horror within film, tv, books, and radio. I’m gonna be honest, if you aren’t into Stephen King or you aren’t that interested in the progression of horror stories throughout the decades then this isn’t for you, BUT if like me, you love anything written by King and are very interested to learn about some books, tv shows and films you might never have heard of then this one is for you!
When I started reading it I was really happy that it was partly an autobiography; King would explain a certain part of horror that he enjoyed or found interesting and then back it up with a story from his childhood about his first horror film or something that really used to scare him. Usually I’m not super into autobiographies but it was nice to have these little stories woven into the essay.
The book is pretty long, the font is small and the text is wordy but that doesn't mean it isn’t good! Throughout, he references parts of books or manuscripts from films which means you get a lot of little snippets of horror that you weren't expecting as well.
But I think my favourite part of the book is right at the very end, in the index he has laid out over 200 books, films and tv shows that he thinks are worth watching to truly appreciate the genre, of course, I’ve looked on Netflix and can’t really find any of the films but I have managed to find most of the books so I’ve saved them to read for another Halloween!
The part that really sums up the greatness and humour within his writing is the very last sentence that reads “But, being who I am and what I am, I cannot find it in my heart to wish you pleasant dreams…” I just love it, that is exactly what keeps me coming back.
If you’re looking for a bit of a chunkier read to take you through to Halloween and you want to learn about the roots of a very much loved genre, then try and find this one!
H x
Book Review Books Charity Shop Buys Eco Friendly Halloween History Horror Sustainable Buying