I’m sure this isn’t a new book to anyone with it being an international best-seller and having a film attached to it and all, BUT I only just finished it so we’re gonna talk about it!

I didn't expect so many twists and turns! This book looks like it’s taking you in one direction (and at times it seems the most obvious one) and then you’re pulled in a completely different direction and end up in a place you really didn't expect. Confused? Then you know how I felt reading Gone Girl.
Don’t get me wrong, being confused isn’t a bad thing with this book, I was so interested in the different storylines and characters; for only having a handful of characters Flynn uses every single one to the best of her ability making you question everyone's motive.
Now to explain; Gone Girl is all about Nick and Amy Dunne, a REAL couple with REAL problems. Nick is untrusting of women (apart from his twin sister) due to his father’s misogynistic view of the fairer sex and therefore finds it difficult to express his emotions, Amy is constantly feeling let down by having to uproot her life whenever her husband asks her to but their main issue? They hate each other. So what is Nick to do when he comes home to find his wife missing, his house turned upside down, and all the evidence pointing at him? On follows an amazing story where just when you think you know the answer, it’s thrown back in your face so many times until you stop guessing and just turn each page to see what happens next! 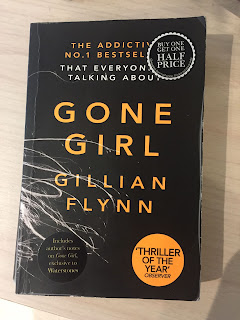 I didn't expect this book to be as good as it was, there are plenty of novels with “International Best-Seller” written across the cover that turn out to be a little obvious and almost boring, but Gone Girl is not one of those books. Nick’s character is very heartfelt and you’re torn between hating him and feeling sorry for him all the way to the end, Amy, on the other hand, made me feel empowered all the way through as she tries to get you on her side to understand her feelings and her reasonings, I won’t tell you anymore but just know that you cannot trust anyone you meet in this book…including the most innocent ones.
A lot of people have told me the film isn’t nearly as good as the book (isn’t that always the way?) but I’ve saved it on Netflix and I will get round to watching it, when I do I’ll amend this post and tell you if it’s any good! For now, if you see this book hidden in a charity shop bookshelf or your friend is finally done with reading it for the 1000th time then definitely pick it up, I promise you won’t put it down and I hope you get lost in it just like I did.
***TW*** Although the book is great I feel I’ve got to say it includes rape as well as emotional and mental abuse so if you are sensitive to those subjects, just make sure you know what you’re reading before you start.
Enjoy!
H x
Book Review Books Charity Shop Buys Sustainable Buying Thriller