Last month we took a trip to Canterbury just for the day for some sightseeing. We were absolutely blown away by how beautiful this little place is, for starters we didn't know it had so many waterways! It’s a bit like Oxford in that there are loads of tiny canals going through and underneath buildings and you can even book a gondola trip around the canals (but I don’t trust those tiny boats). 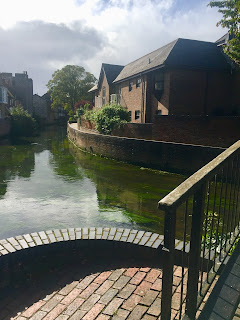 The first thing we saw was this beautiful city wall entrance, which gives you some idea of just how old this city is if it still has its city walls! Nowadays though, the city wall entrance is surrounded by chic bars and restaurants but they still have that old-world charm with the REALLY narrow Tudor streets that seem to wind throughout the city for miles. 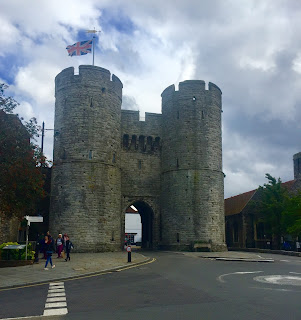 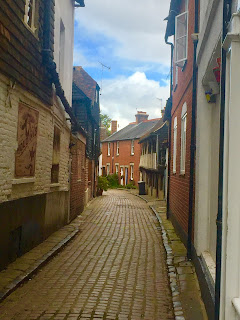 The main reason we visited Canterbury was to see The Beaney; a museum (of sorts). Anyone who knows me knows I love a good museum, but The Beaney was something else, this was a natural history museum, a people’s museum, an art gallery, and an interactive learning experience! It had artifacts both from Canterbury and abroad that had been collected throughout the 19th century by a man called Dr. James George Beaney who enjoyed collecting artifacts from his travels around the world including…a mummified cat (you’ll have to go to see it!). This place was awesome, it was so much more than we were expecting, the rooms were so decadent and everything was spaced out well and in a way that told a story as you walked through. The best part about The Beaney is that it's completely free! They even offer separate times for people will accessibility needs to see the museum in their own time too, if you find yourself in Canterbury with a spare hour or so then 100% go and visit The Beaney! 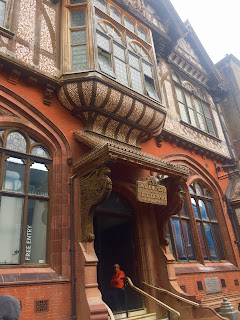 So as I'm sure you know, the main reason people visit Canterbury is to see the cathedral. We did consider going in but then the lady asked for over £20 EACH to come in, there was a huge queue and quite frankly, the staff were a bit rude. You couldn’t even see the cathedral as work was being done so scaffolding was blocking the view and the only entrance is through the gift shop, so there is no other way in if you just want a quick peek, the only other way is to go as part of a service, if you’re interested in being part of a service in the cathedral then it’s your lucky day! It’s completely free to go in if you’re taking part in the service but obviously, if you are going for that then you will be expected to take part and not just wander around looking at the masonry, but, if that sounds like something you’d like to see then go and take part!
The closest we got to the cathedral was this huge wooden door, you could see the hundreds of years worth of use its had as well as how re-inforced it was, I just wish we could have gone inside. 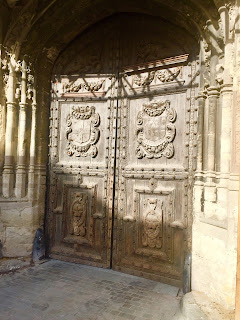 After "visiting" the cathedral we took a stroll along the high street and saw some lovely vegan/sustainable living shops as well as so many charity shops specialising in books! We also stopped for lunch at Warrens Bakery which is right next to the cathedral (so you can sit and watch the queue at the entrance), they served so many different sandwiches, pastries, cakes, and a delicious vegetarian Cornish pasty! After lunch we went to have a look at the art gallery across from the bakery because we saw they had some prints from Ronnie Wood and Bob Dylan, we had so much fun looking around the artwork and we really wished we could have taken some home!
On the walk back to the car park we came across another vegan/sustainable lifestyle shop, it was just the colors that attracted me! And then just around the corner was this funny little building that looked like it was gonna topple over at any moment, all of these buildings and tiny streets are scattered around the outside of the cathedral walls, so you don’t have to walk very far to see something unusual. 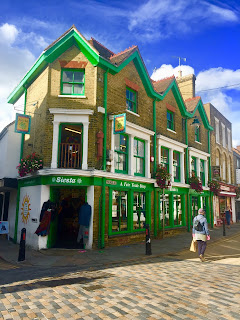 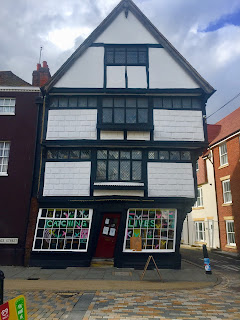 All in all, we had a great day in Canterbury and will definitely be coming back to have some food at those chic bars and restaurants I was talking about as well as hopefully buying way too many books from the charity shops around there! I feel like Canterbury is a great day out for couples, friends, or just embracing some much needed ‘me’ time wandering the high-street, there’s plenty of history to explore as well as some more modern luxuries too! 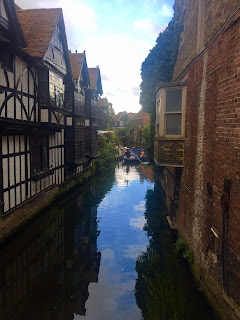