on October 27, 2020
This was definitely a trial-run, some things work out first time around and others take a second or third attempt…this is one of those where I might have to try again. I found this recipe in a free Co-op magazine and thought it looked fun, after the success of the pumpkin cookies I knew I wanted to try another pumpkin recipe. This was actually a bit difficult to make and VERY time-consuming but don’t let me put you off, if you have better baking skills than me then this might not be as difficult for you or if you have the same level of baking skill as me then look at this as a chance to grow, and that’s what baking is all about right? 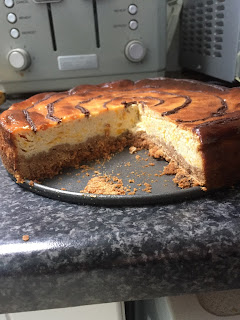 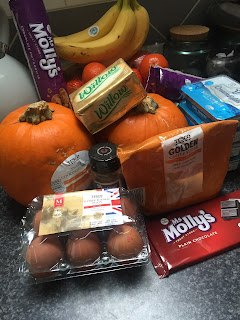 Method
Preheat your oven to 200C/ 180 Fan/ Gas Mark 6 and then grease a 23cm spring-form cake tin with leftover butter (I used a 20cm tin as it was the only one I had, it worked fine but there was just a bit of leftover base and cheesecake mixture so bear that in mind if you have a smaller tin like mine). 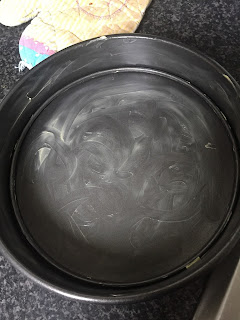 To cook the pumpkin I ended up using two methods, if like me you don’t have a hand blender then the second method will work better for you. For both methods you’ll first want to take off the rind and dice the pumpkin into 1cm chunks so it cooks quicker and is easier to mash.
Method 1: Put the pumpkin on an oiled baking tray, sprinkle with al little bit of water and cover tightly with foil. 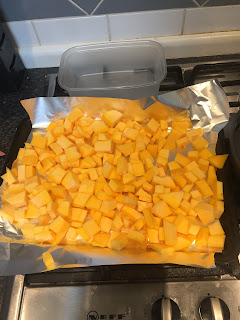 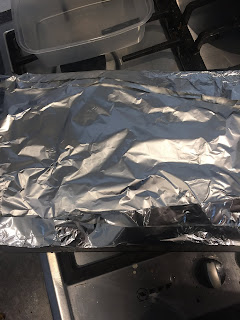 Cook this for between 45-50 minutes then drain off any excess liquid and blend with a hand mixer/blender until it forms a smooth paste/puree.
Method 2: Put your diced pumpkin into a microwave-proof bowl with a lid and cook on high for 7 minutes, take the pumpkin out and stir it then put back on high for another 7 minutes. Once it’s soft use a spoon or potato masher to mash it into a smooth paste/puree.
Leave to cool and reduce the oven temperature to 170C/150 Fan/ Gas Mark 3. 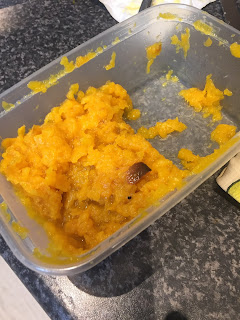 Now to make the cheesecake base smash together (it’ll be much easier if you have a food processor, but I don’t so I had to use good old-fashioned elbow grease) all the cookies with 1 tsp of cinnamon until it has a fine crumb texture. 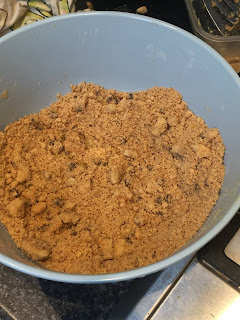 Then add in the melted butter and combine, tip the mixture into the bottom of your cake tin and compress it down into an even layer, then chill it in the fridge for at least an hour! 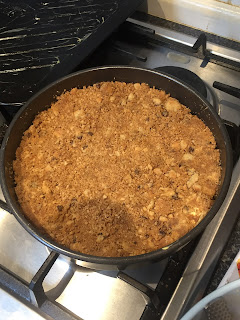 Once your pumpkin puree has cooled, take 400g of it and combine with an electric mixer the soft cheese, sugar, egg and leftover cinnamon. 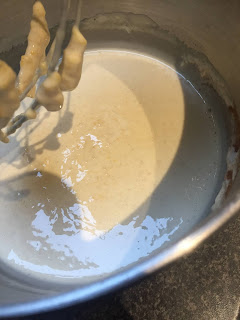 Keep mixing until you have a smooth mixture with no lumps, reserve 100g of batter then pour the rest over the top of your cookie base, leaving about a 1-inch gap from the top of the tin. 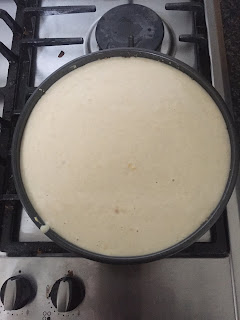 Now melt your chocolate in a heat-proof bowl above a pan of simmering water then mix with the leftover 100g pumpkin batter. Spoon this into a piping bag and fit with a 2mm piping nozzle. This part is where I made my mistake, I didn't reserve any batter and just melted the chocolate and put it on top of the cheesecake, this meant the chocolate immediately set on top and I couldn’t feather it to create a cobweb design…always read the recipe! 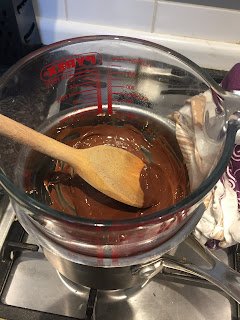 This is the fun bit! Using your piping bag, pipe circles starting from the middle of the cheesecake and going out to the edge with 1-2cm gaps in between, then with a toothpick draw straight lines from the centre outwards every 2-3 cm to create that cobweb effect! 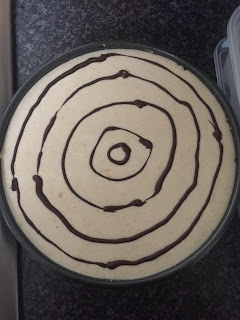 Now just bake the cheesecake on the middle shelf for 1 hour 30 minutes, it should still have a slight wobble in the centre. Again, I made another mistake here and baked it on the top shelf so it's much darker than I wanted it to be but never mind! Once it’s cooked, turn the oven off and leave the door slightly open for at least an hour until it has fully cooled. After that, remove it from the oven and chill overnight in the fridge. 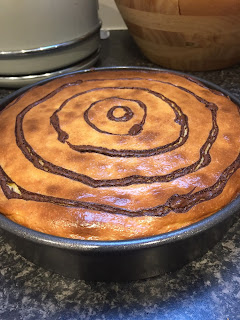 This was definitely the most challenging thing I’ve made in a while, and although it’s far from perfect I’m glad I still gave it a go and at least have something to work towards next time! I still like the circular pattern on top but I do wish it had the cool spiderweb effect that I hope yours has! This recipe isn’t something to whizz up really quick, it will probably take a full morning or afternoon to make and then you have to leave it overnight before you serve it so make sure you’ve left yourself plenty of time. Like I said at the beginning, this recipe uses a lot of ingredients and takes a while but if it’s something you’ve never tried and you want to spend some time learning how to make it then it’ll be rewarding no matter the outcome! 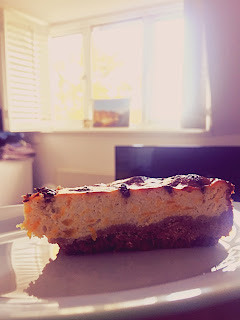