Possibly the highlight of my month (if not my year the way it’s going) was taking a trip to Tulley’s PYO Pumpkin Patch in Crawley. This authentic pumpkin farm has so much more than just 1000’s of pumpkins to choose from! 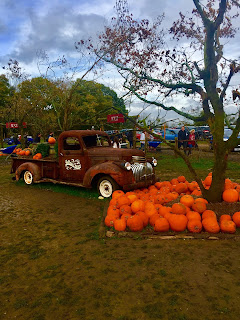 So through the entrance tent we went, off to our first job; choosing a wheelbarrow. I know this might sound mundane but it's an important job! The fields were very muddy and I saw more than my fair share of people (mainly children) being pulled along in the mud by their wheelbarrows so naturally, we went for the biggest one we could find and headed for the field! On the way there they had a lot of little activities for kids including looking at all the different types and styles of pumpkins, listening to some singing chickens (who had suspicious Scottish accents) before braving it past the “bad pumpkins” hangout, this was a very cool addition and just had a huge metal pumpkin carved with a scary smile! 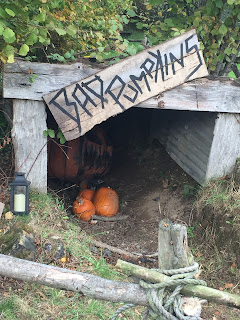 We finally made it to the pumpkin patch! Yes, the field was massive and VERY muddy, we both said that this is as close to a music festival as we’re gonna get this year so may as well embrace the mud. It was so hard to pick pumpkins, we went in with the mindset of choosing two…obviously, we ended up with four but I’ll explain them all in a bit. We decided to walk all the way around the field and pick up every pumpkin we liked the look of then choose 4 of them at the exit and put the rest back in the field, as we went around we started to find all these weird-looking ones; green ones, white ones and ones that resembled butts. 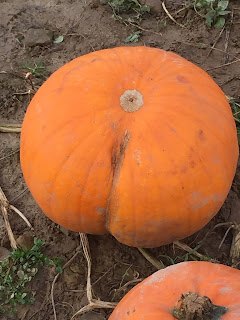 All the way around the field they've placed little photo opportunities for the Instagram star in all of us, they had a little frame to poke your head through with some branding around, a shelter to hide from the rain (thankfully we didn't need that) and my favourite; an old pub-style piano, I can confidently say that it still played and sounded as disjointed and creepy as you’d hope a piano stood alone in a pumpkin patch would. 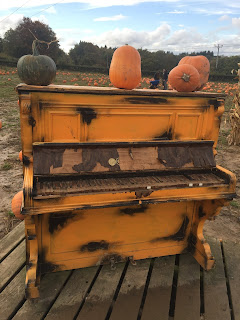 Once we had walked the full length of the field and chosen our four pumpkins we headed out the patch and into the main area of Tulley’s. Here they had a play area, seating, burger vans, pumpkin-themed set designs and “The Taco & Donut Shack”…obviously we were going there! 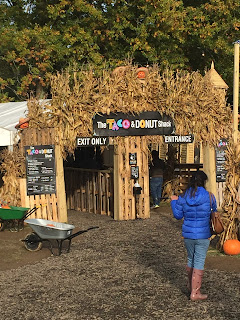 We ended the day with six beautiful, hot, sugary donuts and a can of coke, just what we needed after trudging through the mud for a couple of hours. Some really good things to know are that all the packaging on the food and drinks looked to be recyclable, the seating was all socially distanced and even though it was 3pm in the afternoon it wasn’t very busy at all. 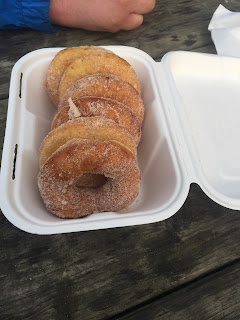 Now I can show you what we did with the pumpkins! Don’t worry I don’t want any of these going to waste so I’m going to do my best to make pumpkin bread with them and the parts we don’t use I’m going to put out for our bird and squirrel friends.
So, we ended up getting a really small pumpkin purely because it was only 50p and I knew it would look cute out on our roof where the birds sit, then we chose a dark green pumpkin that already had a head-shape look to it, then we tried to find the most “classic-looking” pumpkin we could in a big size to use on our front garden wall and finally we had to pick up a tube-shaped one that was covered in warty lumps and bumps.
Here are the first three altogether! 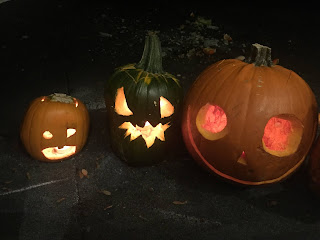 We put the biggest pumpkin in the front garden with a fake pillar candle and I love how it looks facing out onto all the cars going by! 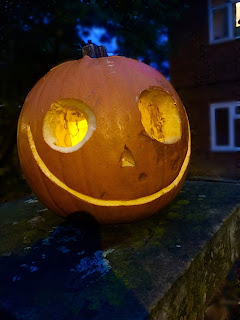 Then I put the green one in our kitchen facing out onto the street and next to my Aloe Vera, I love how creepy this one looks in with its little tea light! 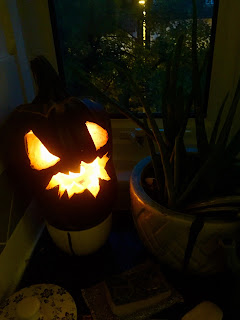 All in all, it was one of the best days I’ve had this year and call me stupid but I honestly didn't know there were big commercial pumpkin patches open to the public in the UK, I always thought it was an American thing so it made me feel so festive to finally see one for real! Tulley’s also does a Haunted Drive-In Cinema that serves food as well as a Christmas-land too so if you didn't catch the pumpkin field for Halloween you could always take a look at what they've got in store for Christmas!
No matter what you’re doing tonight, I hope you have fun, stay safe and eat as many sweets as you can stomach! I’m about to settle down with some veggie spring rolls, homemade popcorn with a big bag of M&M’s and watch horror movies alone in the dark. Wish me luck!
Happy Halloween
H x
Autumn Days Out Eco Friendly Halloween Nature Sustainable Buying