I found this in a charity shop and honestly, only took it because I liked the cover and the back said it was based in L.A. The Sellout is a very unique book, written about a topic a lot of us would never even want to think about; bringing back segregation between white people and all other ethnic minorities.

I know I know, it’s an awful topic, and a lot of the time that I was reading the book I kept thinking “should I really be reading this?” But, Beatty turns this seemingly awful idea on its head, not to something I would say I agree with but I at least understand where the character is coming from.
Sellout is all about one man (he uses his nickname Bonbon or his last name Me) living in one of the poorest areas of L.A., Dickens. The town is so poor in fact that the government literally wipes it off the map, taking the name off of maps, sat-navs and even removing all the signs around the town so it becomes nameless. Our main character doesn't want to lose the roots of his nameless town, so he begins to try and bring it back by painting white lines around the town boundary, trying to sister it with towns in other countries, and also creating his own signs to hang on the highways. All of this happens alongside him having his own farm within this inner-city town where he grows the tastiest satsumas, apples, and watermelons AND is even growing ridiculous amounts of artisan marijuana that he names after the emotions or memories you’ll experience whilst smoking it.
While all this is going on, one washed-up local celebrity that was friends with Bonbon’s father asks if he can be Bonbon’s slave, a real slave that will do his bidding all day and that he can whip to his heart's content…Bonbon is obviously upset by this and totally disagrees but in time begins to understand why someone of his stature would feel the need to stoop to that level just to feel appreciated again. 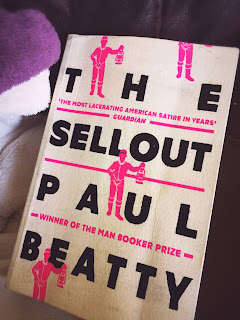 The hard-hitting part within this book is when Me decides to try and re-integrate segregation into the local community; the majority of the community are Black, Latino, and Asian so, understandably think this idea is awful and will only throw them back into a time they thought they had grown from. But, when Me gets the local school principal on his side, every white child is removed from school and asked to either home-school or join the new “all-white” school that’s about to be built. As the parents of these children rally around to try and get them back into school, the other “minority” students see a sharp rise in their attendance and test scores, actually becoming one of the highest-ranking schools in the state. They come to realise that when there is no white privilege around them, they’re free to finally have that “equal opportunity” they’ve been promised for so long, now the children aren’t threatened by white kids money or class, they’re finally able to just get down and work with no outside distraction, which proves to be very positive in the long-run for both the school and the wider community.
Now please don’t think I’m saying I agree with bringing back segregation, it’s just a fictional book BUT it does carry an important message that even though apparently we all are offered equal opportunities, we know that simply isn’t the case. It may not always be a racial issue it could be location, class, or education level but we know that sometimes someone is offered a better opportunity than us and it’s not always just because they’re better suited.
As I say, I felt quite uncomfortable reading some of the things in this book, but only because I was finally seeing this topic from a different point of view and finding myself actually understanding why someone would call for something as drastic as a re-integration of segregation and then seeing it work positively not just for a small group of students but for a wider community who have had their roots taken away without a second thought.
In this crucial time of the BLM movement, I feel this book could be quite an important read for a lot of people of every race, it talks about how people are thrown aside just because of the way they’re perceived and then judged again twice as harsh when they have to make things better for themselves in the only way they can.
If you find this in a book-shop or online I urge you to pick it up, it may just change your perspective…or at least strengthen it!
H x
Book Review Books Charity Shop Buys Eco Friendly History Sustainable Buying