I found this book in a charity shop and honestly only picked it up because of its front cover (I’m well aware of the lessons we’ve all been taught as children about this). The sinister-looking building, the Chinook helicopter flying over-head, and all of that bathed in red…this looks spooky! Well let me tell you…it’s not a horror book…like, at all.

This book is actually an almost true story about what happens within the secret walls of The Vatican when The Pope passes away and the city is forced to choose a new Pope. I know, this isn’t the sort of thing I usually read either but it’s one of the best things I’ve read this year! So, it’s a true story in the fact that the book explains in great detail the journey from the minute the Pope dies, to the minute the new Pope is voted in, the names within the book are all made up as well as the events that take place around the voting but the rest is factually accurate and it was fascinating to read! 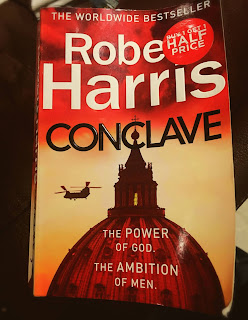 The book follows Cardinal Lomeli, an experienced and very well respected member of the Vatican as he not only comes to terms with the death of his dear friend The Pope but also then has to organise the meeting of over 100 cardinals from all corners of the world to come to The Vatican and vote for a new Pope. Safe to say this wasn’t going to be easy, there were cardinals already forming allegiances and trying to get others to vote for them (which isn’t allowed, the voting is impartial and you cannot persuade others) and there were some simply voting for themselves (which is allowed), Lomeli had to try and stop the gossiping and make sure the voting took place each day, honestly and to the best of their abilities as the world outside The Sistine Chapel was waiting to see the new Pope.
Obviously, things never go to plan, I won't spoil it but the arrival of a new cardinal throws a spanner in the works, certain events from outside The Vatican start to put pressure on the cardinals to come to an agreement faster and certain Cardinals inside begin to show their true colours.
This book is a real page-turner, I wasn’t sure I was going to be into it at the beginning as I’m not a religious person let alone a Catholic with any idea of how the religion operates but it was explained so well, in so much detail and made so exciting that I couldn’t stop reading! I was making my own votes with each turn of the page and I had to cover the outcome with my hand because I kept reading too far ahead!
If you want a bit of a different read that will still keep you interested from the first page to the last, then Conclave is the book for you. It was written in 2018 so it has a lot of modern twists in it as well as a lot of detail on the more traditional facets of the religion. There was a lot of talk on women within The Vatican as well as different races and cultures place within the religion and the true-to-real-life struggle that a lot of cardinals face when trying to keep their long-winding roots within the religion but also proudly trying to make a place for people who are under-represented (or not represented at all in some cases).
If you see this one on Amazon or on a bookshelf I really urge you to buy it, you won’t regret it!
H x
Book Review Books Charity Shop Buys Eco Friendly History Italy Sustainable Buying