It’s Bonfire Night! Although not my favourite day of the year (I don’t like standing out in the cold being deafened) it does always remind me of that cosy bonfire, cute sparklers and everything doused in cinnamon, so what better way to celebrate this time of year than with a cinnamon cupcake decorated with a “bonfire” on top! I'm using my tried and tested vanilla cupcake recipe with the addition of some seasonal cinnamon for warmth and I also experimented with adding in some sweetened condensed milk to make my cupcakes less dry...let me tell you it worked like a charm! 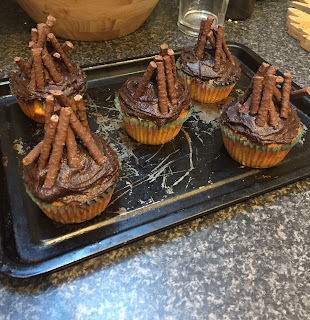 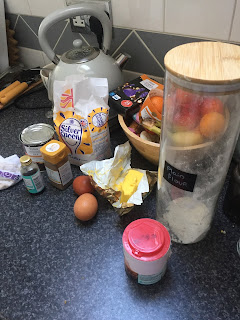 First of all, preheat your oven to 200C/ 180 Fan/ Gas Mark 4 and line a cupcake tray with cases. In a large bowl cream together the butter, sugar and vanilla extract until smooth and creamy. 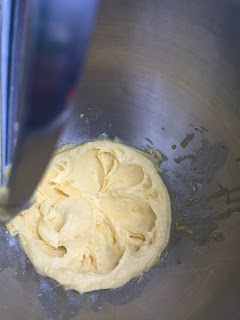 Now, add in your eggs and condensed milk then mix until fully combined. The batter will probably look really wet but that's ok. Pour in the flour, cinnamon and baking powder then beat until you have a smooth batter with no lumps. 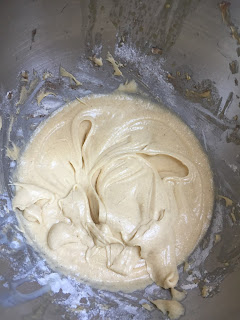 Now divide the mixture between your cupcake cases. Take the granulated sugar and cinnamon, mix them together and then liberally sprinkle over the top of each cupcake, this will give us a lovely crunchy top when baking. 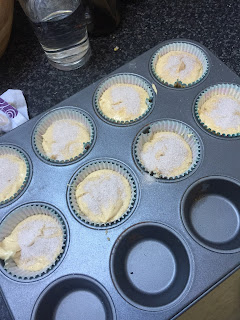 Bake in the oven for between 15-20 minutes until they're golden brown and a toothpick comes out clean. Leave to cool on a wire rack for at least 15 minutes. 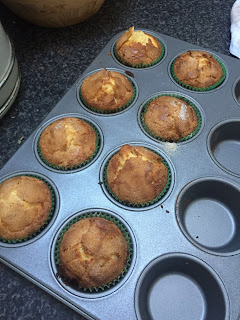 I was a bit of a cheat this time and just used store-bought chocolate frosting for the cupcakes, BUT it wasn't wasteful because it was leftover frosting from the Halloween haunted house that we made last month. But anyway, using a butter knife, layer the frosting on nice and thick and spread it around the whole top of each cupcake until it's fully covered. 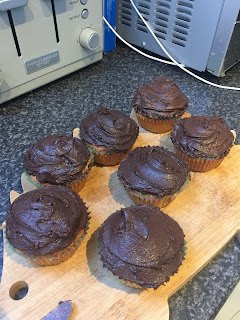 Now, take your chocolate sticks and break them into uneven log lengths and place them standing up and arranged into a point in the centre of your cupcakes, now you're ready to eat! 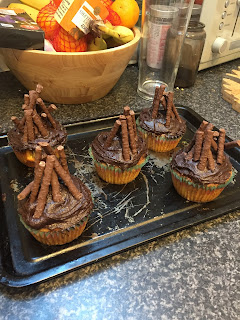 And that is that! It's a pretty simple bake that I modified from last years attempt, and to be fair I wish I was able to make buttercream flames to go underneath the logs but I'm just not there yet! Here is my first attempt from last year but I think I prefer the smaller chocolate sticks from this year, but I appreciate all the effort I went to to make the cupcakes and two different types of buttercream from the year before. 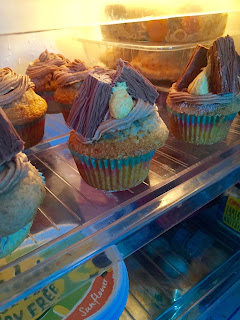 Even on their own, those cinnamon cupcakes are beautiful (I will be making more without icing to snack on over Christmas), I had one still warm out the oven and really had to resist eating more of them! I found that putting them in the fridge obviously took away some of the fluffiness from the cupcake so try and keep them somewhere cool and covered so the icing doesn't melt but maybe not somewhere as cold as a fridge. The chocolate sticks add an adorable touch to the top and if I can perfect my icing skills and the colouring I think these could look great!
We have a lot of pets and wild animals around us so we bought some of the "quieter" fireworks this year that are branded as "low noise" so they won't boom like huge fireworks they just shoot up into the air and make pretty colours! We also got some sparklers and then of course we'll finish the evening with a cheeky rum hot chocolate and a cupcake!
I’m not lecturing anybody but all I will say is, please consider pets in neighbouring houses when setting off fireworks (WE understand what a firework is but no amount of training or calming techniques will prepare pets for them) and if you’re having a bonfire PLEASE check your wood and leaves for hedgehogs as they love to hide in amongst them.
Aside from that, I hope you have the best Bonfire Night you can with as many of your loved ones as possible.
H x
Autumn Baking dessert Easy Recipe Food Quick Recipe Seasonal Snacks Treats Vegetarian