So it seems we still won’t be traveling anywhere any time soon, so we decided to reminisce on our holiday to Naples, Italy last year by having a go at making authentic Neapolitan pizza from scratch!

This wasn’t actually as difficult as I thought it was gonna be, I used a recipe from a blog called My Pizza Corner and it was very detailed and clear which meant we could keep track of where we were whilst making it. This isn’t a quick process, the dough takes at least 24 hours to prove overall so you’re gonna want to make this a day ahead of when you want to eat it but it only adds to the great flavour! 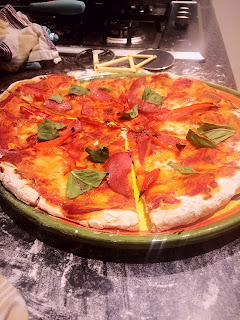 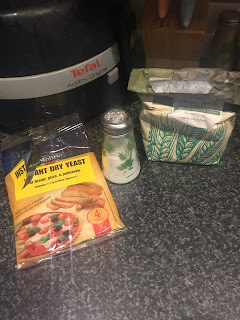 ***I realise while I’m writing this that I made a HUGE mistake with the yeast amount, I added 14g of yeast when the recipe called for 0.14g!! I left it at the amount I used as the dough we had was still delicious and crispy but it was quite prone to tearing so I think if you use the smaller amount of yeast it might hold together better…for reference, 0.14g of yeast is about 1/2 a tbsp.***
To start with add the water into a large bowl and then mix all the dough ingredients together until it forms a shaggy shape, it doesn't need to form a perfect dough ball at this stage. It’s probably best to bring it together with a wooden spoon and then use your hands to pick up all the odd bits. 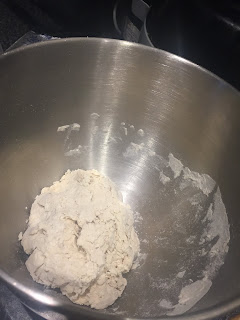 Once you’ve combined your ingredients, cover the bowl with a tea towel or foil, and leave this in a warm place to rise for 1 hour.
After the hour has passed, tip the dough onto a lightly floured surface and knead it for 5 minutes. Put all your body weight into the dough and try to stretch it a little with the heel of your hand whilst your kneading to really activate that yeast.
After 5 minutes the dough should be in a ball and not sticky. 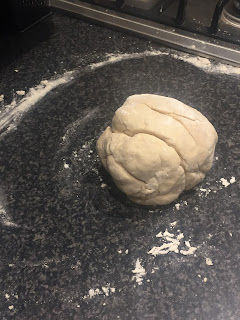 Put the dough back in a bowl and cover again with a tea towel or foil and now allow this to sit somewhere warm for 20 hours!
About 4 hours BEFORE you want to cook your pizza, remove it from the bowl and cut it into two equal balls. 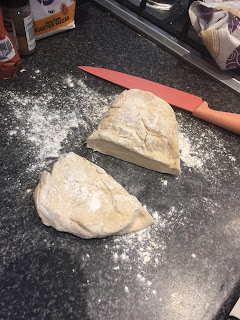 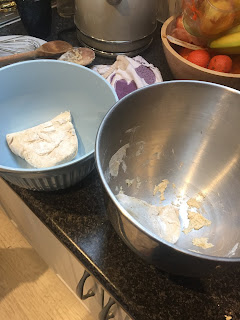 Place the dough balls into two separate bowls and cover these with foil or a tea towel and leave in a warm place for the remaining 4 hours to rise on their own until you want to cook the pizzas.
On My Pizza Corner, they suggested trying to dry out your mozzarella before putting it on the pizza, as the bases are so thin it would be difficult for them to cook with that heavy mozzarella on top. So, 30 minutes before you want to cook, slice up your mozzarella and leave it wrapped in a tea towel to dry out a little bit! 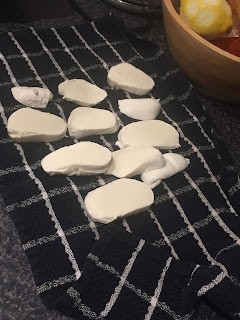 Now comes the best part!!
Preheat your oven to 260C/ 240 Fan/ Gas Mark 9, we want this oven as hot as it will go to imitate a traditional pizza oven. Put your pizza tray/ stone into the oven to preheat with it.
It’s best to do each pizza one at a time so that the dough isn’t prepared and then left to dry up. So, take one of your dough balls, lightly dust it in flour and then put a fair amount of flour in the bottom of the bowl too. With the dough still in the bowl, lightly press down from the middle of the dough out to the edge, this pushes the air from the middle of the dough to the edge creating a crust and leaving a thin crispy base. Be careful not to touch the crusts as pushing on these will lose the air and then it’s hard to get it back!
Keep pushing the dough until you form a little pizza, then flip the dough over in the bowl and repeat on the other side, once this is done, take it out onto a floured surface and begin to gently stretch the dough outwards to make your pizza bigger and reinforce that crust around the outside. 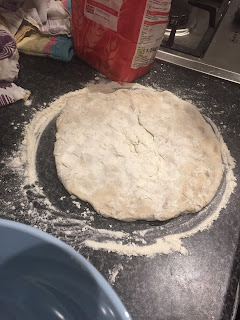 Keep turning and pushing the dough until it reaches about 9-10 inches and it’s ready to top! 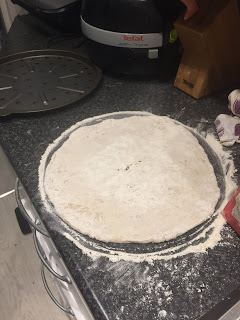 Now, top the base with about 3 tbsp passata and spread evenly around the base, making sure you leave room at the edge for the crust to rise! 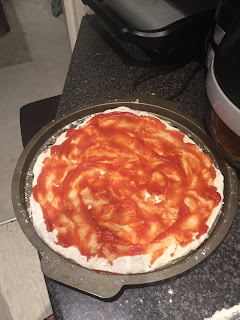 Spread your sliced/grated mozzarella on top of the passata and then add your desired toppings! (Leave the basil until the pizza has actually cooked).
Load your pizza onto a chopping board to slide it onto the baking tray, be careful the tray is gonna be really hot! 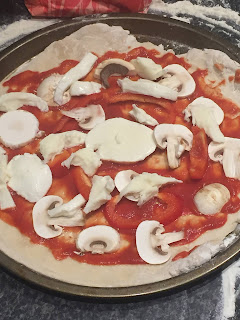 And finally, leave your pizza to cook in the oven for between 6-8 minutes; ours only took 6 minutes at most until the dough feels firm, the cheese has melted and your toppings have cooked!
At this point, you can remove it from the oven, add your scattering of basil leaves, slice it up and tuck in! 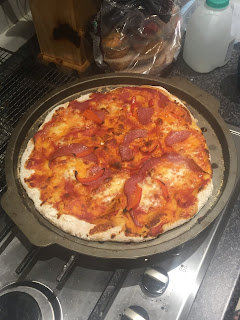 Don’t forget to follow these steps with your remaining pizzas and enjoy your little pizza party!
We had so much fun making these and were genuinely surprised by how good they were, the base was crisp, the crusts had alot of aeration in them (which means they had those bubbles that you see in thick bread like sourdough) granted, they weren’t as good as the pizza and pasta that we had in Naples but it was fun to try and create something similar to that, we’re seriously considering investing in one of those little portable pizza ovens so we can make these even more like the real thing next time!
If you’ve got a spare couple of days with the ones you love, why not take a trip to Italy (hypothetically) with these Neapolitan Pizzas!
Ciao!
H x
Dinner Europe Food Italy Lunch Travel Travel Diary Vegetarian