I can’t believe it’s finally December, although we know 70% of this year was lost, I think we’ve all tried our best to make the most of it; finding new hobbies, reconnecting with loved ones, and maybe starting a new job or finally leaving one you’ve always hated. I’m not really here to talk about anything that exciting, just a gift website, some amazing vegan ice-cream, and a creepy movie we found on Netflix!

Future Kept
Whilst looking for some more eco-friendly alternatives to the gift ideas I had in mind for my family, I stumbled upon a brand called The Future Kept, this beautiful brand is based on the south coast of England and sells everything from candles, shampoo bars, nail cream, gardening equipment, chutneys and all kinds of hand-made blankets and throws. Obviously, I don’t really want to say what I bought in case anybody finds out about their gift! But, I will say within three weeks I bought 5 things from them, it started off with just one idea for my auntie and before I knew it I had bought another thing for her and then more gifts for my mum and my partner’s mum, each product is incredibly well-made, the food items come well-packaged and protected, their toiletries are vegan and cruelty-free as well as using natural ingredients and all of this comes packaged in a cardboard box with fully recyclable packaging, each time I've bought from them I've also received a thoughtful hand-written note just saying thanks for buying the product, it really means a lot to get this each time and shows just how much they care about each individual purchase!
If you’re looking for a brand offering honest, sustainable, and above all beautiful gifts for every inch of yourself and your home then have a look around The Future Kept, there literally is something for everyone!
Wicked Vegan Chocolate Ice Dream
One night I was sleepily wandering through the supermarket about 30 mins before it closed, I knew I wanted chocolate but nothing was hitting the spot…until I saw some tasty looking vegan ice cream! This vegan chocolate Ice Dream (I’m not spelling it wrong that is genuinely its name) from Wicked tastes more like an Aero Bubble mousse than just chocolate ice cream, it was only £2 for a pretty big tub and it was sooooo good! I’m fully vegetarian but I eat alot of vegan meat alternatives and I've been trying to introduce more vegan foods into my diet starting with places where I eat the most dairy which is chocolate and cheese, although I'm still not 100% convinced on vegan cheese, this ice cream is easily some of the best I've ever had, it’s creamy, rich and way too easy to eat a whole tub in one night. I’m definitely gonna be treating myself to this every now and then, I've also seen a vanilla one too so I’ll be trying that next!
Obviously, vegan ice cream isn’t just beneficial for vegans, it's an amazing alternative for people who are lactose-intolerant as well as those like me that aren’t vegan but are trying to make a change to parts of their diet; let’s face it, this chocolate ice cream is good for everyone!
His House
The last thing I want to share is a movie that came out on Netflix around Halloween called His House. It’s described as a supernatural horror but I think it’s also telling a much deeper story about the refugee crisis going on around the world at the moment.
His House is about a husband and wife seeking asylum from war-torn South Sudan, they eventually manage to find safety in the UK and are placed in a pretty big house all to themselves, the neighbourhood is less than welcoming and they soon start to realise that they may have been given this house for a reason other than asylum.
I won’t spoil who is in their house but they keep seeing REALLY creepy things, from things seeping down the walls, noises around the house, and zombie-like creatures who want to harm them but don’t seem to be physically able to touch the couple.
Aside from these clearly make-believe ghosts, they do deal with some all-too-real trauma when they think back to having to escape South Sudan after seeing their family and friends massacred, they escape on a boat across the ocean, again, having to watch survivors drowned in the sea during a storm and I couldn’t help thinking these moments are far more key than the fictitious horror we see throughout it.
I feel like His House is sending a message to those of us fortunate enough to never have had to even contemplate seeking asylum away from the country of your birth, never having to think about the gruesome death of pretty much your entire family and never having to even dream of crossing continents and oceans in a small boat just to reach safety, although the couple is dealing with some pretty horrifying things in their home, I think they come to realise that it’s nothing compared to what they’ve already survived. 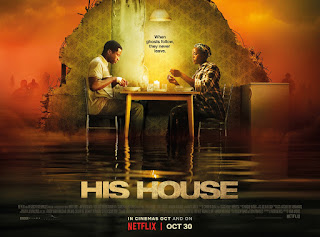 Image from Netflix
His House is an incredible film, it’s genuinely scary whilst also heartbreaking at the same time. You go from classic horror to just watching them try to speak with the lady next door, from surviving a massacre to just trying to learn where the doctor's surgery is, the film is so special and covered a topic much bigger and far more real than just ghosts and ghouls, we both agreed we’ll watch it again soon to fully take it all in.
If you want a film that’s brutally honest about the process of being labeled a refugee and the lengths that people go to every day just to survive both in their native country and their new-found safety then 100% go and find His House!
I hope you enjoyed hearing about some of my favourites from November and I can’t wait to get Christmassy with you all now we’re in December! I’ve got some really festive things coming your way.
Merry Christmas,
H x
Eco Friendly Halloween Horror Monthly Favourites Sustainable Buying Thriller Treats Vegan