Last month we went on a little hike around Scadbury park in Bromley. Although the name might not sound so great, the park itself was beautiful! We went on a 2-mile walk around the park, it was well signposted so it was easy to walk around without worrying about getting lost and there was so much to see! 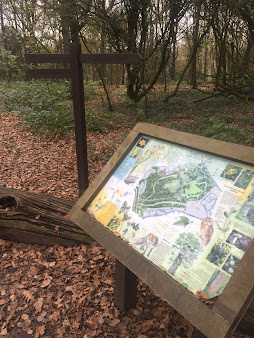 First of all, we walked through the woods, it looks great this time of year as the leaves are just hanging on and the light was a bit dim, so although it might look a little creepy, it was very serene. Also, living in the trees in and around the park are London’s famous green parakeets! They’re INCREDIBLY noisy, we heard them before we spotted them but it was so beautiful to see these brightly coloured tropical birds thriving in such a wintry forest, unfortunately, they were too fast to get a picture but enjoy the woodland anyway. 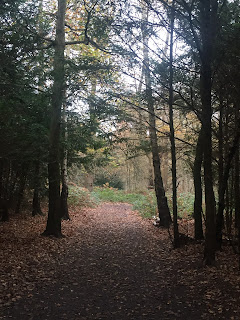 It’s not just woodland that we walked through, we ended up at the “moated manor”, these ruins used to house a huge mansion from the 1600s with a family who were close friends with King Henry VIII! Sadly, over the years owners have built it up and taken it down until it’s nothing more than ruins now but, The Orpington Archaeological Society now looks after it and is constantly finding all sorts of artefacts from Tudor all the way to roman coins! 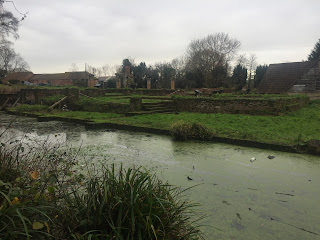 On the way back round to the start you end up walking next to open fields full of horses and ponies! They were well looked after and were all too happy to run over for a scratch! From here it was about 15 minutes back to the starting point. 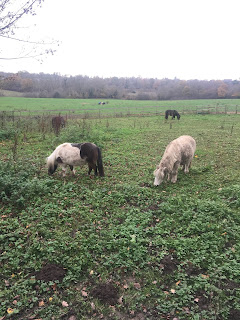 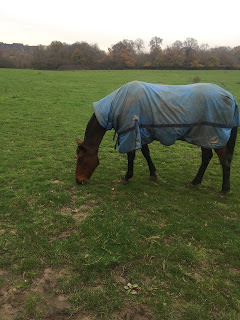 If you live near Scadbury Park or fancy a day out, I promise it’ll be worth it! The walk is a 2-mile round trip so will be more than doable for most people, it’s great to get out into nature seeing the parakeets and horses as well as the surprise of that moated manor! The only sticking point is the final stretch past the horses and ponies, it’s quite a big hill back to the starting point but there are benches to rest on at the bottom and top if you need it.
Although it was great fun to go out walking in the summer, I’m almost enjoying these winter walks more as they’re much quieter and you see a lot more nature now that all the animals are out foraging for food!
There is a little bit of parking, enough for about 15 cars I would say so maybe get down there for a mid-morning walk before everyone else decides to!
***AUTUMN UPDATE***
We took a walk around Scadbury again over Halloween and the start of November, we wanted to drop off our pumpkins so they wouldn't go to waste, I hoped all the animals and bugs would enjoy a couple of pumpkins, and they certainly did! Look what happened to my pumpkin in the space of a week... 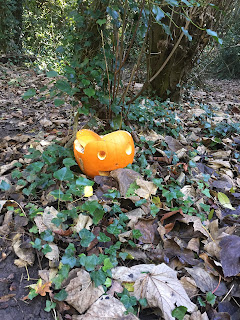 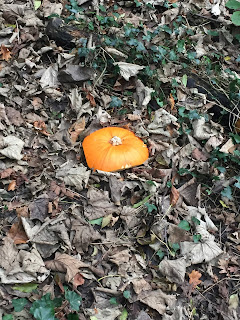 As the trees lost their leaves we were able to see more of the green parakeets around too. Whenever we go, we always stop and look out for them, you're ALWAYS able to hear them (they do a lot of talking) but they're very good at hiding in the leaves, so I was really happy to see a huge amount of them all huddled on this tree together...I know the picture quality isn't great so forgive me for that. 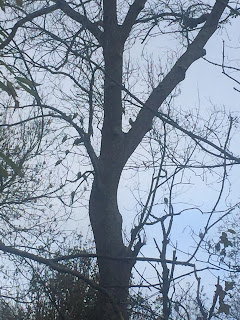 But the main thing I wanted to update you on is the Bear Trail that's made it's way to Scadbury in June of this year! These beautiful carved wooden bears are part of a wider trail all throughout Chislehurst, designed to get families out and about on a good old-fashioned bear hunt! We noticed them at the start of autumn but weren't sure how long they would be there for, but it seems they're staying which is great! Although the bears are only on the shorter dog walking trail and not on the longer trail I've written about, they are in the more populated areas near the car park, picnic area, play area, and the start of the dog-walking trail.
Just look at how cute they are! 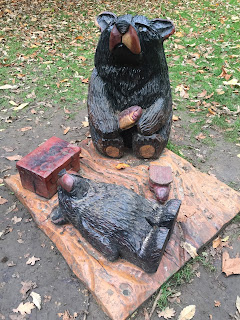 I just want to also give credit where it's due for these amazing carvings and the wonderful people that made it happen.
Will Lee is the mastermind behind the bears, Will carves sculptures with a chainsaw from already felled trees and created all the bears this way, so obviously not only are they beautiful but they're sustainable too.
Alison Stammers is the lady behind the bear idea and the Chislehurst bear trail (clearly a brilliant mind!)
and finally, The Chiselhurst Society was able to fund the entire project and make it happen for us all to enjoy.
We visit Scadbury Park regularly now as we know the trail and it's great to see the woodland change with the seasons, but it's lovely to see that it's being cared for so well and new additions can be brought in without interrupting its main purpose; being a beautiful home for British wildlife.
***BONUS WALK***
I said to my boyfriend that I wouldn’t write about the next place as we went there thinking we'd go on a nice walking trail and it turned out to be very disappointing but I just want you to see what we went through!
Jugg Hill, near Biggin Hill, is a “park” suitable for walks…so they say.
You walk down the muddy steps into a tiny field that’s no more than 30ft long leading onto some woodland but the main pathway…well, just look at this picture I don’t need to explain anything. 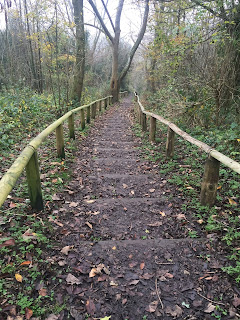 …Yes, I did walk all the way down those… 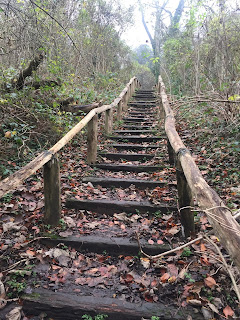 …Yes, we did then see these on the other side and have to walk up them to get back to the car…
I’m not recommending you go here, there’s literally nothing at Jugg Hill except steps and rubbish, but if you want your Rocky Balboa moment running up the steps then knock yourself out!
H x
Adventure Animals Days Out History Nature