Never has a vegan dish been so hearty!! I know vegan meals get a lot of stick for being “rabbit-food” or using weird ingredients but I feel like the more people are moving to a plant-based diet, the simpler these recipes are becoming. This Tesco hotpot recipe was done and dusted in just over an hour so it makes for a perfect plant-based treat for the whole family, I just had it on its own but you could add some fresh veg to the side for a bit extra! And this made enough for me to take to lunch the next day too. 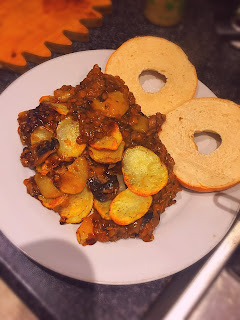 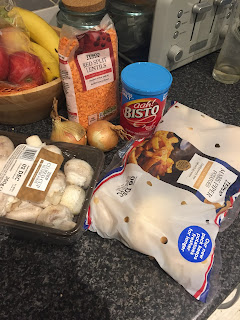 To start with, peel and finely chop the onions and put them in a frying pan with a tbsp of oil on medium-high heat and allow them to cook for at least 10 minutes until they start to soften. 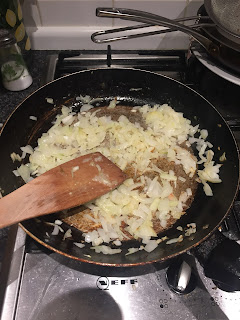 Now, chop up your mushrooms (in the recipe they finely chop them to be like mince but I just roughly sliced them so they still have a bit of bite). Add the mushrooms to the pan with the onions and cook for 10 minutes until they soften up too. 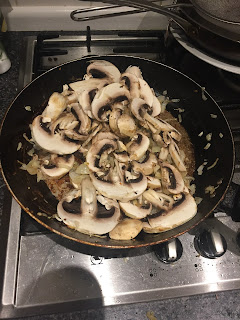 Make your gravy in a jug, add your dry lentils into the pan of onions and mushrooms, pour over the gravy, reduce the heat and let it all simmer for around 15 minutes or until the lentils are soft. Keep stirring it so it doesn't stick to the pan! 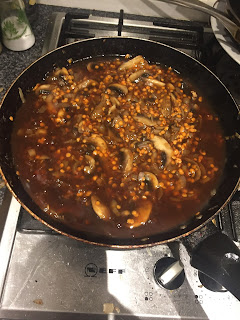 Preheat the oven to 200 C/ 180 Fan/ Gas Mark 6. Peel the potatoes and then slice them VERY thinly, we only want them about 2-3mm thick so they’re able to crisp up fast in the oven, I tested mine out by peeling a potato and layering the slices in the dish until it covered from one end to the other with a little hole in the middle to let the steam out, I only did about 2 layers of potato but I would have liked at least one more layer as they were super tasty!
Once you’ve got enough slices, put them in a bowl and lightly coat them with oil, salt, and pepper. 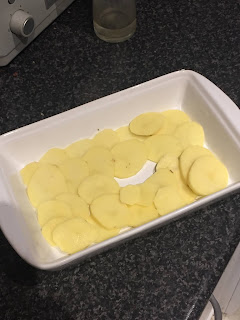 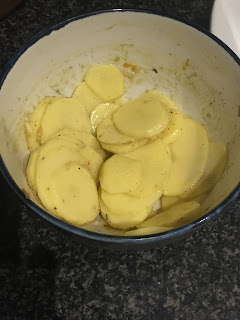 Your hotpot mix should be done simmering by now, take it off the heat and pour into an oven-proof dish, I used a ceramic roaster and it worked out just fine. 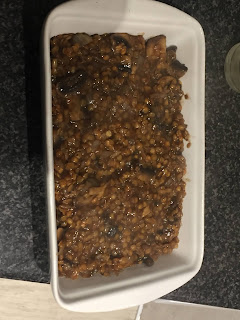 Now, arrange your potato slices on top leaving a small hole in the middle like we talked about, and let it cook on the middle shelf for about 45 minutes until the centre is bubbling and the potatoes are crispy! 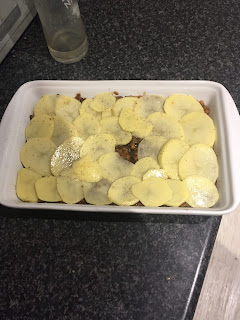 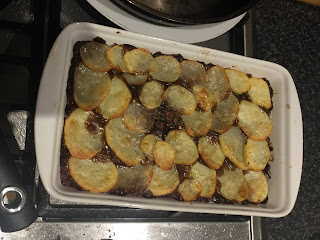 And that’s it! How easy is this warming and nutritious vegan dinner?! Once you get into the swing of things it really doesn't take that long, so if you have extra time during the week or fancy a bit of a special weekend meal then I think this would be perfect…if I may be so bold…I think this would make a great vegan addition to the Christmas dinner table, it has all the components of a Christmas meal, just add some beautiful carrots and stuffing on the side (and more gravy of course) and I don’t see why this couldn’t sit pride of place!
I’ll definitely be making this later on this week and I think I will make another one to pick at for those lazy hours at the end of Christmas Day!
Merry Christmas!
H x
Christmas Dinner Easy Recipe Food Vegan Vegetarian