I found this book in a charity shop and expected it to be a super scary horror. What I got was a very unnerving and edge-of-your-seat crime thriller set in the tiny Isles of Scilly on the English Coast near Cornwall.

I’ve never been to the isles of Scilly much less read a book about them, this book was way more intense than I expected it to be but still gave you that feeling that everybody was in each other's pockets and un-willing to tell the full side of their story. 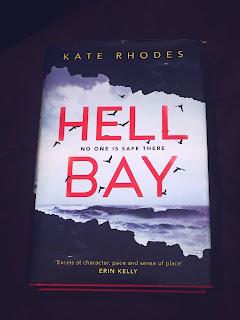 Hell Bay centres around DI Ben Kitto, born on the Isles of Scilly but living and working in London, Ben decides to return home after a devastating loss in London leaves him wondering whether he should even be in the police force anymore. When Ben arrives on the tiny island of Bryher, he expects to spend a month or so quietly working in his uncle’s boatyard while he desperately tries to repair himself and his career, what Ben actually gets is an island in turmoil with everybody looking to him to save them!
Within days there has been a murder; the death of young Laura Trescothick rocks the community as they soon realise that only a local could have lulled her into the false sense of security needed to murder her on the clifftops, so sets in a wave of fear throughout the island where everybody is questioned and no one is safe.
Alongside Laura’s death comes a few more tragedies (that I won't spoil) that begin to bring Ben closer to the answer he’s looking for and to ultimately make a decision after the murder is solved about whether he still wants to be involved in such gruesome crimes, especially when they’re this close to home.
Like I say, I was surprised about both the setting and the story-line for this one, but that doesn’t mean I didn't like it! I managed to get through this one in just under two weeks and was a little bit sad when it came to an end.
I feel like Rhodes has a natural ability to really build the characters and their stories to the point where you feel like you know them personally so you understand each move that each character makes, which means you simultaneously trust everyone and no one!
This book isn’t very Christmassy and maybe not too positive to start the new year on but, I know there are plenty of people out there like me that just love a good crime book, especially one set on a tiny island off the Cornish coast!
I know it’s pretty much impossible to get to a charity shop right now to try and find similar gems like this one, so maybe have a look on Amazon and see if they’re doing this one used, it’s well worth the searching!
H x
Book Review Books Charity Shop Buys Sustainable Buying Thriller