This is the 5th book in the 8-part Home Front Detective Series by Marston. My boyfriend’s mum gave me 4 out of the 8 and so far I've read this one and the final book in the series; The Unseen Hand. I didn't do a review on The Unseen Hand as I didn't enjoy it as much but I feel like with Dance of Death I knew what I was getting myself into and could just enjoy the story itself.

Dance of Death centres around 1916 wartime London. The first German zeppelin has just been shot down, and while the city had their eyes to the skies, a gruesome murder had been committed against a very popular and respected member of the British Ballroom dancing scene. Describing the murder is no spoiler by the way…the victim; Simon Wilder is one of the most prolific champions of UK ballroom dancing and seems to have so many friends and admirers…or does he?
On comes a series of suspects that DI Marmion and Sergeant Joe Keedy think must be the obvious answer just to find out that although these suspects may hold a grudge, they would never stoop to murder; current and ex-wives, rival competition, and even Wilder’s old manager come under the firing line but the real murderer was someone you would have never even guessed! 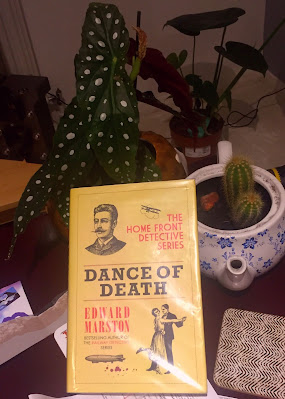 I really enjoyed this book, it had that classic crime story that you’d expect to find in an old black and white film. All the suspects had very very suspicious personalities, you could almost hear them meeting in secret between the pages without you! If you’re really into crime or war-time novels then I highly recommend the Home Front Detective Series, not only does it have great storylines and characters, the information and the scene that’s set about everyday war-time Britain is so in-depth and Marston has clearly done a lot of research into that time period to be able to immerse us in the way that he does.
I think you could get the whole series (used of course) on Amazon as a New Year’s gift to yourself, 8 books should keep you going for a while!
Happy New Year!
H x
Book Review Books Eco Friendly Sustainable Buying