I found this book in a charity shop and genuinely thought (like I do with every book) that this was a horror. “The Island” sounds so creepy right? So I read the back and realised it wasn’t a horror at all, but it was about a large group of people trying to build their own community on a tiny island off the coast of Greece, which still sounds interesting to me.

Well, The Island is possibly one of the most beautiful books I've ever read, and I'm so happy I didn't just put it back on the shelf, its got real soul and passion in the writing and the storyline, once I tell you the outline of the plot I know you’re gonna want to find it on Amazon (used, of course). 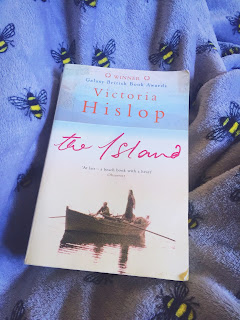 The Island centres (originally) around Alexis Fielding, a normal 25-year-old living in London. She knows her mother has Greek roots but she never talks about it, Alexis has seen the wedding photo on her mothers’ nightstand but the couple in that photo aren’t Alexis’ mother and father, and every time she asks, her mother just says it’s her auntie and uncle. When Alexis decides to take a trip to Greece with her long-term boyfriend, she decides to use it as both an excuse to try and save her relationship but also to do some digging into her family's past. When her mother hears about this, she finally decides to open up and gives Alexis the address to a long time family friend called Fotini who will explain everything her mother can’t.
The meat of the book goes on to explain the family history so we don’t actually hear alot from Alexis until the last chapter but the family history (in a nutshell) tells the story of the Petrakis family who lives on the tiny island of Crete during the 1940s. Eleni and Giorgio (Alexis’ great-grandparents) live a very normal life with their two beautiful daughters Anna and Maria. Life seems to be going well for the Petrakis family until Crete comes under fire with an outbreak of Leprosy which attacks the Petrakis family and forces one of them to go and live on the leper colony island of Spinalonga just off the coast of Crete.
The book tells the story of how this leper colony literally builds Spinalonga from the ground up into a thriving community and not just a place to hide the diseased.
Obviously, throughout this time, the Second World War comes to Crete and threatens to destroy the sleepy island altogether, as war passes and life returns to normality Anna and Maria (now grown women) find themselves wrapped up in a world they never expected to be in.
I feel like I've given enough of the story for you to just taste how great this book really is! I spent many an hour on the phone with my friend Shannon trying to work out what genre this even is! There is a lot of romance but it’s certainly not a romance novel, there is a long excerpt about war-time but it's not a war-based novel, there are murder, disease, and death but its no-where near a horror and although the characters aren’t real, this is obviously how a large number of people in Crete lived their lives at the time but it's not a biography! I’ve decided to label it an “everything-book”, there’s a little of all the genres that we love so much in this book but without too much to overpower the others, and to be honest, the fact I couldn’t pinpoint exactly what this book is has made me love it even more.
I know a lot of us have been really getting into reading more books over the numerous lockdowns we find ourselves in, whether it's to escape from the worrying world outside or just to while away those long hours sometimes. I think if you want to read more or are finding it tough to find a great book to get you started then definitely grab yourself a copy of The Island! I think you’ll love getting lost in this intricate and beautiful storyline filled with so many interesting characters. Once you’ve loved the book and finished it, maybe gift it to a friend who’s in need of some literary respite at the moment too and then you can both gush over it together!
H x
Book Review Books Charity Shop Buys Eco Friendly Greece Sustainable Buying