Back with another book review from Edward Marston and the Homefront Detective Series! This one is the second book in the series and is called Instrument of Slaughter.

The more I read this series, the more I enjoy it, but I wish I'd had the initiative to read them in a semi-order as the storyline does follow-on book to book and the characters’ lives change from book to book so I'm kind of going in between one book where a character knows a plot-line and then going back in another book to where they don’t know anything yet. It doesn’t necessarily ruin it for me but I just wish I had read them in order so I don’t spoil things for myself.
Anyway, Instrument of Slaughter is based around (as usual) Detective Harvey Marmion and his partner, Sergeant Joe Keedy. In this book, the pair investigate the gruesome death of Cyril Ablatt, a young twenty-something who’s been brutally murdered in a dark back street of Shoreditch, London. We begin to find out that Ablatt and his 3 friends are conscientious objectors; which means they don’t want to fight in WWII and will not sign up to be a soldier, wear an army uniform, or help the war effort in any way as they feel they are simply “instruments of slaughter”, and for both religious and moral reasons feel that they can’t take part in fighting or the death of another human. To me, it’s pretty understandable but back in the 40’s when everyone was doing all they could to support their country and their soldiers, conscientious objectors, or “conchies” as some people called them were highly frowned upon and called a whole mix of slurs as well as receiving death threats and physical beatings from angry members of the community. So knowing this, it came as no surprise to Marmion and Keedy that Cyril may not have been the golden-boy that his family and close friends assumed he was.
Following the case, the pair uncover many secrets that a lot of the community wished had stayed buried, all of these secrets culminate into not one, but (almost) two murders in the same part of London, and Marmion and Keedy realise they must get a hold of the murderer/s before they strike again.
As the pair work through the secrets of this seedy Shoreditch neighbourhood, they begin to discover it may not just be his label of a “conchie” that made Cyril a few enemies during his short life, the pair are taken on a chase around London to try and find potential suspects and witnesses. As the case opens up, Marmion discovers he has a few suspects that need questioning but are choosing to stay hidden in the shadows, but as always, the case doesn’t go anywhere near the way you expect it to! 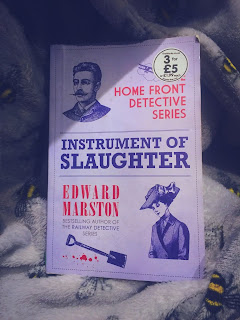 I really enjoyed this one and thought it was one of the best in the series. The story-line really took you on some twists and turns, constantly backtracking trying to work out whether suspects (and some witnesses) were covering their own backs or lying for someone else’s sake, and it constantly kept me guessing all the way through. I also like how Marston has included this inner story between the main characters and especially in this book, you really get to see those characters develop and I understand more of their relationships and connections now.
I know I’ve put a few of the books from this series on the blog so I hope you’ve got a good idea of what the series is like as a whole, I have one more from the series to read after this, and then I will have read almost the whole series, I was gifted these books from my boyfriends mum, hence why I don’t have the full set but I did see that you can buy each book for £2 from Amazon! I always try and get my books from friends or charity shops but of course, you can buy books used from Amazon, still in perfect condition and they’re better for the environment rather than having a whole new book printed…and they’re cheaper on your bank account too!
If you are interested in the series then I say go for it and treat yourself to the whole set, I've had a lot of fun reading them and it’s nice to go back in time and live a different life through these characters every now and then!
H x
Book Review Books Charity Shop Buys Eco Friendly History Sustainable Buying