Everybody knows I love a good Stephen King book and Rose Madder is no different! I was given this book by my partners' mum and assumed it was gonna be another spooky, scary classic King novel…and I wasn’t entirely wrong.

Rose Madder centers around Rosie, a seemingly “mouse-like” character who lives in utter fear of her abusive husband Norman, after 15 years of every kind of abuse you can imagine Rose wakes up one day, takes Norman’s credit card, locks the front door and leaves the house with no intention of ever returning. This is no spoiler by the way, King decides to start his book where most would end; with the victim finally escaping, but Rosie’s escape is just the beginning. As she leaves her house, she realises that Norman is the one who’s dealt with the outside world, and since she got married very young, the furthest she’s ever traveled is to the market down the road (but only on days agreed with Norman), so when she reaches the bus station and buys her ticket to anywhere that's hundreds of miles away, she begins to think that running away may be a mistake if she can’t even buy a bus ticket without panicking but when she finally gets on the bus and it pulls away to a big city far away from Norman, she does her best to stay positive.
I should also mention that this isn’t gonna be an easy story where Rosie stays hidden or decides to run back to her abuser, Norman is a police detective, and a VERY successful one at that, so pair that with this controlling, violent, and abusive tendencies and I think you can paint a picture of just how dangerous this man is. As soon as Norman gets home and realises his wife is missing, he knows he’ll find her and he’ll end whatever it is she tried to start, but he’s infuriated beyond repair that this woman would take his credit card (...small price to pay for the 14 years of abuse that he put her through, I think) and decides that the credit card is the main reason he HAS to find her, and being a police detective it shouldn’t be that hard.
Meanwhile, Rose stays hidden in plain sight in the big city, with help from a few new friends (one, in particular, may prove to be slightly more than a friend) and a surprising new job, she begins to think that she might have finally been freed from her prison. Rosie makes a big step forward when she tries to sell her engagement ring, but instead, she finds a painting in an old pawnshop that draws her in as if she’s seen it a million times before; this painting depicts a strong woman with bright blonde hair and a deep red toga (the colour of the toga is called Rose Madder…get it?) the woman faces away from the viewer of the painting, seeming to look upon the wreckage of a temple and the thundery skies above her, Rosie doesn’t know why, but she HAS to have that painting. I won’t spoil the rest but this Rose Madder painting has a much bigger impact on her life than Rosie originally thinks, it will become both her loss and her gain. 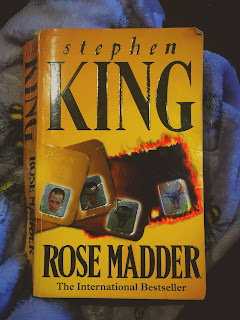 As I said at the start, I’m a sucker for a Stephen King, there is no disputing why he’s one of the best and most successful writers of all time. Rose Madder gave me a different look at his writing, one that isn’t so entrenched in trying to scare or disgust the reader too much with supernatural storylines, this one is based around a much more realistic story, and although you would hope dangerous men like Norman don’t get as far as he does in this book, there are real cases where abusers and violent people are able to inflict just one more fatal blow on their victim. I loved how Rose Madder combined fantasy with realism to give you a world you know could be happening in the house next door but also one that makes you question the “every-day” things that surround you.
I loved this book and unfortunately, I don’t have any more Stephen King books to read for now, but once charity shops are open again I know I'll find some more and I can pour my brain out onto the blog about the next one. If you’ve never read any Stephen King (where have you been?), I HIGHLY suggest Rose Madder, although his classic novels like IT and The Shining are absolute masterpieces, this one seems to be hidden in the shadows a bit more, but I think it shows a writing style that King rarely gets to showcase, one that is far more fact than fiction.
**TW**
This book is incredibly graphic and violent, literally from the first page to the last. We are faced with mental, physical, and emotional abuse throughout as well as miscarriage, rape, countless murders, and very intense violence. If you are sensitive to these subjects just be aware that King is not afraid of gory detail…maybe a little too much sometimes.
But nevertheless, Rose Madder is an incredible book that deserves to be read over and over again, I’ve seen you can buy it used on Amazon for £1.30! Go and treat yourself, you won't regret it!
H x
Book Review Books Eco Friendly Horror Sustainable Buying