This is the last Homefront Detective Series review I’ll be doing for a while (until I can find the rest of the series). Like I’ve said before, I was a bit disappointed I chose to read the books out of order because I keep coming across storylines that I already knew about so it’s not much of a surprise, this one is along the same lines, I won't spoil it but there's a big change to the storyline as the life of Detective Marmion’s son Paul changes forever whilst he’s serving at The Battle of The Somme. 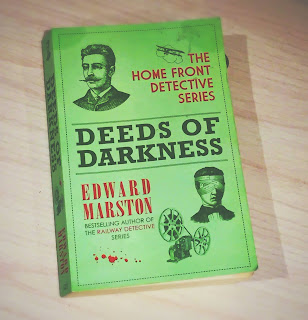 As usual, Deeds of Darkness takes place in 1940’s London during WWII and follows Detective Harvey Marmion and Sergeant Joe Keedy as they try to solve yet another horrific murder. This murder takes place somewhere the public least expects, literally right under their noses in a cinema! A young woman is found strangled in the back row of a cinema and the murderer seems to have fled through a back door but leaves all her personal belongings behind.
As Marmion and Keedy begin to assess this murder, the victims' husband points out that private items of hers have gone missing…namely her underwear! The pair begin to suspect the murderer is in this for more than just a sick, quick thrill. Whilst they’re caught up on this case, another unfortunate victim turns up, far younger than the original victim…and still with her underwear, Marmion notices that on both occasions, both women had artwork and sketches stolen from them, the pair begin to believe they have a predator on the loose disguised as a gentle artist!
Marmion and Keedy use all their power and experience to try and find and prosecute the murderer, but not before getting stuck behind a few loose ends.
I really enjoyed this book, it wasn’t my favourite in the series but the storyline was very interesting and the way the killer makes his way through his victims is fascinating and maybe a little too realistic. As I mentioned in a previous review, you can buy all the books in the series second-hand online for around £2 each! If you like the idea of cosying up with an old-timey murder mystery, then Marston’s got you covered!
H x
Book Review Books Charity Shop Buys Eco Friendly History Sustainable Buying