I’m pretty sure we've all heard of Animal Farm even if you’ve never read it, I like to read all sorts of different books and although my favourite genres are horror and crime I do enjoy reading pretty much anything I can find. I have a list on my Pinterest account (yes, I'm obsessed with making lists so Pinterest more than satisfies my addiction) of books that I want to read, and every now and then I binge on buying some of them online (used, of course) and Animal Farm was just next on the list.

Before even reading it, I knew although the book in its most basic form is about a group of animals that chase their farmer away and try to live independently on the farm so they don’t feel abused and taken for granted anymore, Orwell was also a huge political voice during his time, so Animal Farm also serves as a secret who’s-who of Global and Soviet wars, giving a little nudge through each character into the personalities of real-life war leaders/dictators of that time period. I tried hard to work out who was supposed to be who but unfortunately, most of those references went right over my head. 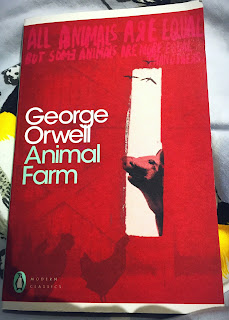 Essentially, Animal Farm centres around Manor House Farm, a normal working farm with a normal farmer and his family. One night one of the most respected animals Old Major the boar says he is not long for the world and needs to impart some wisdom among the animals. What he says is that there will be a revolt between man and animal as farm animals feel they are only used for labor, surviving on the bare minimum whilst the humans live in luxury before the animals are sent away to the slaughterhouse (which isn’t entirely wrong, let’s be honest). After Old Major passes away the next in command steps up, two other pigs called Snowball and Napoleon (fun fact; in the French edition of this book, Napoleon is actually named Cesar to avoid offense) assume power and begin to draw out their “seven commandments” a set of rules which all the animals must live by if they are to work together and respect each other once the humans have gone. As is to be expected, not all the animals can actually read so they rely on others to read the commandments for them, as you may be realising, the smarter ones who can read also become the ones to betray the trust of their slightly less intelligent comrades.
As Napoleon assumes ultimate power after chasing the farmer away, he begins to rebuild the farm, growing new crops and always instilling in his community the importance of hard work. As the years go by, Napoleon becomes drunk with power and I won't spoil it for you but the seven commandments seem to take on a new meaning (one that only seems to benefit Napoleon) one by one. I think my favourite line in the whole novel is one that’s usually pasted all over reviews but it’s such a powerful message:
“All animals are created equal, some are just more equal than others”
This one line sums up the whole of Animal Farm for me, I think this book has transcended past the early 1900s and can be understood and related too even now through many different global issues like; the meat and dairy industries, the upholding of basic human rights, the class divide and I’m sure so many others if you’re alot more politically minded than I am (which isn’t hard).
As I said, I think alot of the historical and political references did go over my head, but I did understand what Orwell was trying to project about how most leaders are leading for some form of personal gain, even if it's just a tiny amount, and how those who are dangerous and find themselves in positions of power could almost bring the destruction of an entire species.
Sorry this is so long but I think this book is really important and should be read in schools! It’s only 100 pages long and Orwell's impressive writing style keeps the storyline moving from page to page without it becoming boring. I wasn’t entirely sure I would even enjoy reading the book but I really did, I was also very grateful for the fact that it did make such a huge impact and is still available to read today as it was first published in 1945!
If you’re looking to step up your reading game and try something that's very easy to read but really asks you to think beyond the main storyline into what Orwell's hinting at and see beyond (although very entertaining) the basic story of some animals who finally gain their independence.
I found the book used online for about £3 so it's very affordable if you did want to give it a go! I’m also looking to read Orwell’s final novel 1984, if you haven’t heard of that then look it up because it sounds incredible!
H x
Book Review Books Eco Friendly History Sustainable Buying