This one has been a LONG time in the making, mainly because I knew I wanted to make a video out of this one and not just use loads of pictures for a normal recipe, so I’ve also been learning the art of editing videos! I’ve been trying to make “fakeaway” food in my spare time to see if any of them are worth putting on the blog and alongside the vegan KFC recipe I put out last week, this Big Mac is well worth giving a go! I’m gonna put a short video on here so you can get a general gist of the method and ingredients to make them and then I'll include a full ingredients list and method down below so you have a choice of both! 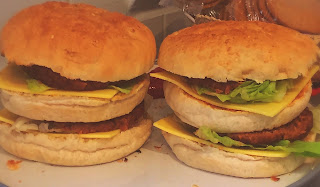 Don’t they taste great! Honestly, I don’t even like the real Big Macs (even when I could eat them) but I would have one of these every night! For just a burger they’re incredibly filling and when you add in the classic flavours of the lettuce and the vegan cheese, as well as that tangy burger sauce then you’ve got yourself a great vegan “fakeaway” the entire family can enjoy! This recipe is so simple (it's hardly a recipe if I'm being honest) and I think it's a great thing to have if you’re vegan/veggie, trying to cut down on your meat, or you simply want to try something new!
I highly recommend giving these a go, you won't look back!
H x
America Dinner Easy Recipe Food Homemade Lunch Quick Recipe Vegan Vegetarian