This is the seasonal ingredient recipe I've been so excited to show you! This watercress and spinach linguine is simple, quick and looks like you put way more effort into it than you did, oh, did I mention it’s delicious?!

This recipe does use a few ingredients but they’re easy to get a hold of if you don’t already have them in your cupboards, I slightly cheated and used spinach linguine instead of plain linguine just for a better colour but you could use whichever linguine you wanted (or spaghetti if you don’t have linguine), this recipe is one tiny ingredient away from being vegan too, I just couldn’t get linguine that didn't use egg, so if you can get a hold of some eggless linguine pasta then your recipe will be 100% vegan!
The main reason I love this recipe is the fresh flavour and smell you get from it as soon as it starts cooking, I might be bigging myself up a bit but I would pay for this at a restaurant; drizzle on a bit of olive oil, sea salt and freshly grated cheese (maybe some garlic bread on the side?) and you’re on to a truly delicious meal that’ll impress your loved ones and won't take any longer than 15 minutes! 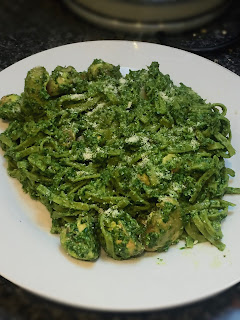 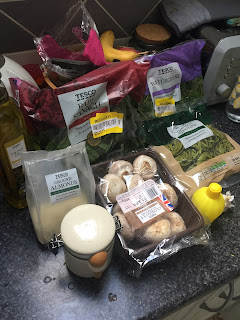 To start with we want to make our spinach and watercress pesto, in a food processor add spinach, watercress, half the mushrooms (roughly dice them so they break up faster) and the chopped garlic. Whizz this for a couple of minutes until the watercress and spinach have broken down into small ribbons/chunks. 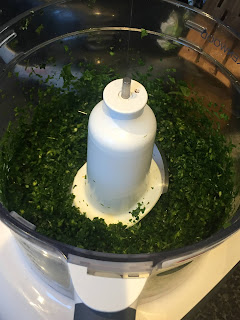 Now, add in your ground almonds, olive oil, lemon juice and a dash of salt and pepper and whizz this all together until you have a thick pesto that's light in colour. 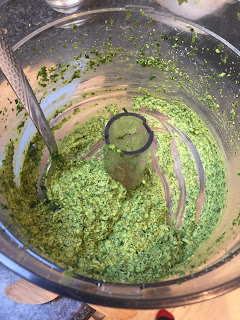 We’re pretty much done now, heat a pan of boiling salted water and let the linguine cook for 2-4 minutes until the nests have separated and the pasta floats on the top. 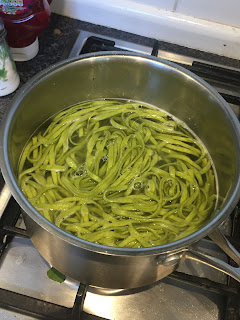 Once the linguine has cooked, drain off the water in a colander and pour some boiling water over the top just so that the starch runs off and set aside in the colander for a second.
Heat a large frying pan on low heat with a tsp oil, then pour the linguine into the pan, pour your pesto over the top and slice/ chop up the rest of your mushrooms to add in if you want to. As the dish is cooking, season well with salt and pepper and keep turning the pasta and pesto over so it all has a good chance to cook and infuse together. Cook in the pan until the dish is steaming and hot, transfer to a plate and you’re ready to chow down!! 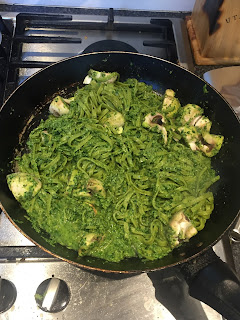 This is fast gonna become a staple recipe for me I can just feel it, although you have to use the food processor and that's a bit of pain to wash up, I think it really is worth the process once you get down to eating that fresh pasta with a delicious thick pesto on top. The flavours within this are light but still delicious, you get that perfect balance of greens from the spinach and peppery watercress, a big hit of garlic and the slightest freshness from the lemon.
This linguine would be perfect as a side at a BBQ or even just to make a huge batch and serve it up to everyone you love for a big summer meal together in the garden! I think it has loads of potential to add anything extra you wanted for just a bit of extra flavour but with the help of a food processor, it’s simple enough for anyone with any level of cooking experience to enjoy!
If you’re looking for a dish that's filling, light and fresh then I think you need to have a go at this linguine.
H x
Dinner Easy Recipe Food Lunch Quick Recipe Seasonal Vegetarian