What better way to round up this year’s Easter than with some traditional Hot Cross Buns! Up until 2-3 years ago I hated these, the idea of eating soft spiced bread with squishy currants and raisins just sounded gross…until I had them toasted, from then on I became obsessed and I thought it was time I had a go at making them myself! I've finally been able to create my own version using what I've learned over the last couple of years and it's given me the softest, most perfectly spiced buns I could have hoped for. I've even added in my homemade Candied Orange Peel (click for the recipe), it's optional but it's a beautiful burst of citrus if you're looking for it. I'm not the most experienced baker by any stretch of the imagination but (so far) each time I make Hot Cross Buns, they come out pretty much perfect! What I'm trying to say is you don't need to be a brilliant baker to enjoy these traditional Easter beauties. 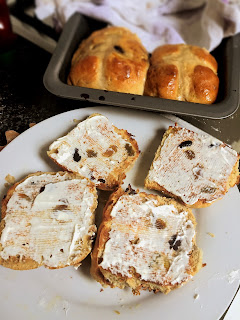 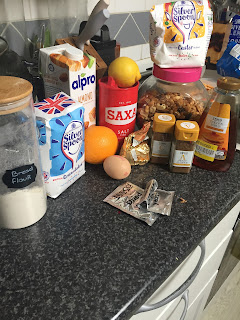 Bring milk to a boil in a saucepan on medium heat constantly stirring, add in the butter until almost melted and the milk starts to steam then take it off the heat and set aside. 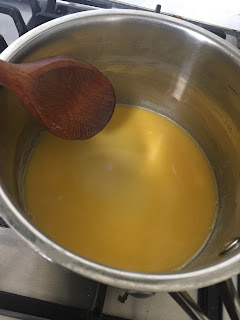 Put the yeast in a small bowl or mug and cover with 4 tbsp of warm water then leave to activate for around 10-12 mins until it's bubbling. 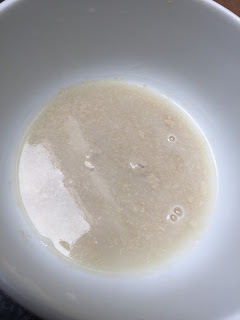 Pour flour, sugar, salt, and the yeast mix into a stand mixer then combine them together at a slow speed until it's loose and powdery. 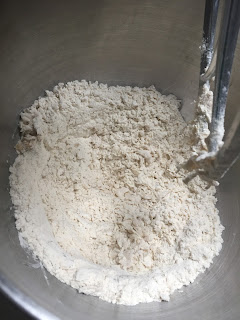 Tip the dough out onto a clean, lightly floured surface and knead for at least 5 mins until it's elastic and no longer sticky. 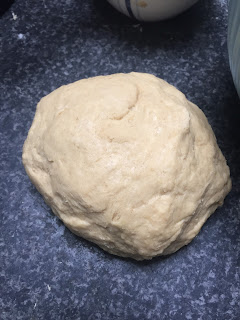 Now, put the dough into a large, lightly oiled bowl, cover with a tea towel and leave somewhere warm to rise for at least an hour or until doubled in size. 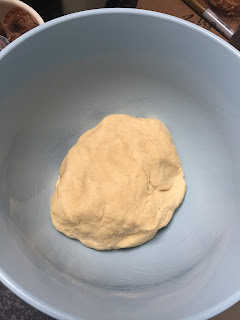 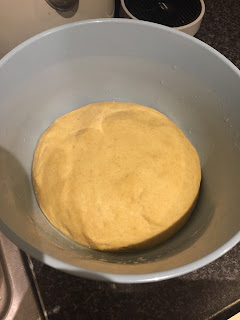 Once risen tip the dough out onto a lightly floured surface. Add the zest, raisins, orange peel, and spices, evenly distributing them through the dough as you knead it. Once fully incorporated, pop the dough back into the bowl, cover with a tea towel and leave it in a warm place again to rise for another hour. 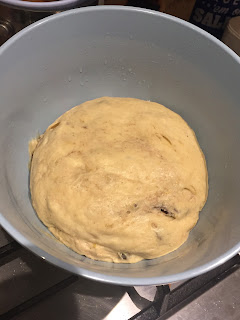 Divide the dough into 6 balls and place them into a non-stick brownie tray, they don't need to be miles apart from each other but don't squash the buns together as they need room to rise, about an inch in space will do. Leave to rise for the last time for an hour but in the last 15 mins of proving, preheat the oven to 220C/ 200 Fan/ Gas Mark 7. 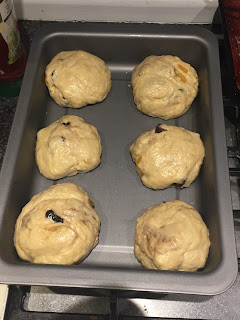 Now for the white crosses! I have to admit that this is the only part of this process I can't seem to get right, each time I make a thick paste I think it's too thick and water it down then it becomes too thin and dries like cardboard when baked...oh well, maybe next year? Anyway, put the flour and water in a mug and mix together like pancake batter until it's smooth and thick with no lumps. It should be thick enough to not run but thin enough to pipe, then set aside. 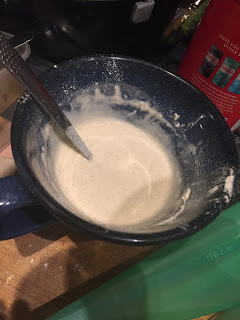 Now with your risen buns score each one to create a definite deep cross. Put the flour paste into a piping bag and pipe crosses onto each bun, it's ok if the crosses overlap. 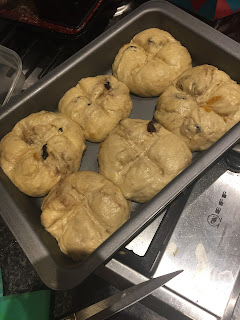 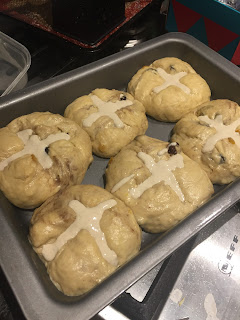 Pop the buns in the oven and bake for 20 mins, turning around halfway through until golden and a toothpick inserted into each one comes out clean.
Dollop a little golden syrup on the top of each bun whilst they're still warm and use a pastry brush to brush the syrup across the buns then leave to cool for 10 mins before enjoying! 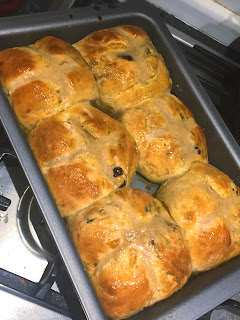 I love this recipe! The candied peel worked perfectly alongside the raisins and those lovely spices to make sweet, soft, warmly spiced buns that are delicious whether toasted or eaten cold. As I mentioned above, I still need to work on getting those white crosses just right but that will come with time and trusting myself a little more! Although this recipe does take at least 3 hours because of all the rising times, if you start out early and give yourself plenty of time it's not that difficult...it's all in the patience!
It’s been so nice to have a go at all these different Easter-inspired recipes, I’ve enjoyed the challenge and although some of them weren’t perfect, I definitely learned a lot in the process. Now, I'm hoping it stays warm so I can share some lovely cocktail/ mocktail and summery recipes with you all!
I hope you have a wonderful Easter, I’ll be celebrating by having another Easter BBQ in the garden!
Happy Easter to all who celebrate!
H x
Baking Breakfast dessert easter Easy Recipe Food Homemade Seasonal Snacks Spring Treats Vegetarian