Back again with another classic murder mystery, but this one involves some potentially demonic goings-on, oh, and it’s set in the mid-1800s around the American Civil War.

When I first started reading The Dante Club I was a little intimidated by how academic the writing was, how many characters there are, and how small the font is! But, I kept going because the storyline was very very interesting, it’s a slow burner of a book but with just enough on each page to keep you going. If you love a historical, murder mystery, or supernatural fiction then I think you’ll want to hear about this one! 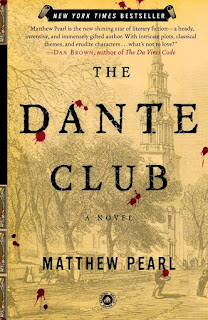 picture from Amazon
The Dante Club centers around a prestigious group of writers and academics who have dubbed themselves “The Dante Club” as they meet on a weekly basis to try and translate a book called “Divine Comedy" by Dante Alighieri (that is a real book by the way) from Italian into English in the hopes of introducing this religious fiction to the masses.
As the meetings go on, the group learns of a series of gruesome murders happening within their own bustling inner-city Boston that seems to relate to each passage that they study. As the writers carry on through The Divine Comedy; which is all about Dante’s physical journey through Hell and The Underworld, they start to realise that these murders may not be the work of some demon that they’ve let loose by reading the passages, but in fact, some Dante copy-cat who wants to get their own revenge on the greedy, selfish and average members of the community.
Once the men realise they may be putting members of the public at risk, they go on a man-hunt to find the killer responsible, in the process they learn some deep truths about each other that may threaten both the continuation of the book translation and their own lives!
As you can imagine, this book is pretty in-depth with alot of characters intertwining alot of individual stories, this becomes pretty overwhelming and difficult to read at times as you try to remember who each character is associated with and why their story is important to the overall book, but if you ride the wave of the story I hope you’ll become as engrossed as I did to try and work out where the killer would strike next depending on what passage the authors were studying and also if The Dante Club is such a prestigious and private club, then how does the killer know what passage is being read to then act out a similar murder?
You’ll have to get the book to find that out!! I got this book in a charity shop but I have seen it in a used condition online for about £1, and when you’ve finished this one, the story carries on with a second book that Pearl published 15 years after this one! The Dante Chamber is similar to the first book, where everyone thinks the gruesome murders in Boston are long gone, but a murder takes place in our very own London and the victim is left with nothing but a script from The Divine Comedy around his neck…ooh! I might have to find this one for myself!
As I said before if you’re a lover of historical, supernatural, or murder mystery then I think I've just found your perfect combo! Remember to always try and buy books used or from charity shops to save yourself some money, do your bit for the environment, and possibly help a worthy cause!
Happy Reading,
H x
Book Review Books Charity Shop Buys Eco Friendly History Horror Sustainable Buying Thriller