At over 700 pages this is easily the biggest book I’ve ever read, but fortunately, it’s also one of those where you wish the pages would keep turning forever as the storyline grips you even from the first chapter! Labyrinth starts off with Alice, an English woman in France helping her friend with an archeological dig in the mountains. Whilst working alone Alice finds what looks like a cave hidden behind a huge rock, as she makes her way inside she sees ancient writing on the wall, as she walks deeper into the pitch-black darkness and her eyes adjust, she sees what look like an altar and two skeletons cradling each other side by side, just as she goes to investigate further…everything goes black and she loses consciousness.

In 1200’s France, Alaïce the daughter of a French dignitary learns of a secret society that involves people much closer to her than she thought, as she fights to keep this secret society alive and discreet in her bustling medieval hamlet she begins to question everybody she knows and trusts.
These two women fight a similar battle in the same location but 800 years apart, modern-day Alice must find out her connection to 1200’s Alaïce before everything they’ve both fought hard to protect is lost forever! 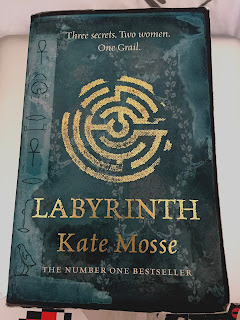 I hope this little insight has made you as excited as I am about this book. I know it's a pretty long one but trust me, it’s well worth taking the time to get lost in, I also recently found out that this book is part of the Languedoc Trilogy and the second book after this is called Sepulchre, you can buy Labyrinth online in a used condition for £2.20 or the entire trilogy used for £12.
I found this book by chance when I went to a different place to work and found it tucked away in a corner, I left it for about 3 months saw that there was no bookmark and no one claimed it so I took it home and I’m so glad I did!
I also heard that Labyrinth has been turned into a film (not the one with David Bowie) and I really want to try and find it to watch as I loved the book so much!!
If you’re really interested then have a scout around the local charity shops and see what you can find or get it pre-loved online, either way, if you’re into historical fiction and fantasy then this is definitely one for you!
H x
Book Review Books France History Sustainable Buying