This is the second book I’ve read by Adichie but I think this is definitely one of her most famous! The first book I read by her called Half of a Yellow Sun really set the tone of her writing for me and when I saw how successful Americanah had been, I knew I had to read it and fortunately I got it as a Christmas present!

Americanah centers around Ifemelu, a Nigerian woman who decides to move to America for work and a new life after a sudden breakdown of a relationship and her own rocky family life. Ifemelu quickly finds that America isn’t all it's cracked up to be; first, she’s forced to use another woman’s social security card just to secure work to pay her own way, then she battles with her auntie who moved from Nigeria at a similar time and is struggling to stay afloat, and then you have Obinze, the love of Ifemelu’s life that she left behind in Nigeria. As she tries to keep her work, schooling, and family life together she can’t help but think that maybe ignoring Obinze and pretending he never existed might be the worst mistake of her life. 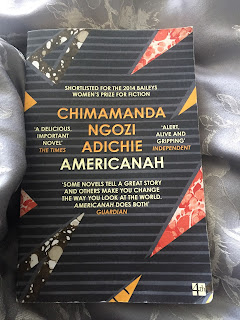 Americanah stands as a realistic view on immigration and starting over, especially for first-generation individuals who know exactly what it's like to leave the place you’ve always known, to move to a strange country all in the hopes of forging a better life for yourself. But this book isn’t as serious and hard-hitting as I'm making it sound, there is so much joy and comedy in between these pages as you learn about traditional Nigerian culture and how this culture and its people try to adapt to America and creating their own Nigerian-American culture within their neighborhoods and friend groups. Even the title of the book is a subtle jibe at the people who choose to move abroad, Ifemelu’s friend calls her “Americanah” on a trip back to Nigeria and explains that she’s still the Nigerian she’s always been but has now adopted these very obvious American-isms that set her slightly apart from her friends.
This book was such a joy to read. It was very different to Half of a Yellow Sun but still had that ever-changing style that Adichie is famed for; one minute you're laughing at Ifemelu, the next you’re feeling her homesickness and loss of her relationship, the next you’re confused and angry as she slides between abandoning America for her comfort blanket of Nigeria or staying in America and losing what she feels is her connection and grounding to her home country and culture.
As I said, I got this book as a gift but I have seen it online in a used condition for £1.76 so if you’re thinking of picking it up for yourself then I say, go for it.
I'm tied between what to read from her next, on one hand, I want to read the first book she ever published called 'Purple Hibiscus' but on the other, the book she released after Americanah; 'We Should All Be Feminists' has been on my radar for a few years…I’ll guess we’ll see which one turns up in a charity shop first!
Happy reading,
H x
Book Review Books