I went through a phase a few months ago of buying books from a list I saw on Pinterest labeled something like “books everyone should read” and it basically detailed a huge list of classic literature, popular books from mainstream genres, and then some important books that many might have missed. One of the books from that list is 'The Diving Bell and The Butterfly' and it falls under the last category. I’d never heard of this book or the author before now but having now read it, I'm so invested in the life and teachings of French journalist Jean-Dominique Bauby that I feel this is a book that everyone should read at least once.

This novel is more than just the diary of a man with a rare and terminal illness known as Pseudocoma or Locked-In Syndrome (LIS) which renders a person paralysed and mute but (usually) with full cognitive use of their mind throughout the illness. The Diving Bell and The Butterfly is written as a first-hand recollection from Bauby about his success in life before and during his illness.
Before LIS, Bauby was a successful journalist and editor-in-chief for many notable magazines but primarily for fashion magazine Elle in Paris. In 1995 Bauby suffered a colossal stroke that sent him into a coma for almost 3 weeks, when he woke up he was completely paralysed, unable to speak, and only had the function of his left eyelid to blink. As LIS began to deteriorate his body, Bauby said he could have spiraled into depression or use this as a time to learn about his condition, teach others and work to find a cure. 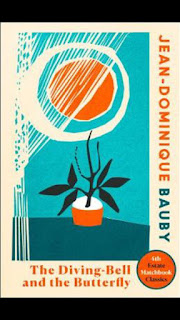 Picture from Waterstones
In the two years left of Bauby’s life he managed to create the masterpiece that is The Diving Bell and The Butterfly. He worked with an amanuensis; Claude Mendibil who dictated the book for him using an extraordinary method devised by Bauby and Mendibil, the two constructed a simplified alphabet consisting of the most common letters in the French alphabet, from there Mendibil would say each letter and wait for Bauby to blink his left eye as a sign to use that letter, the entire novel was written using this method. I was shocked to learn of this while reading it, can you imagine not only waking up “locked-in” your own body with no cure and having to watch yourself slowly deteriorate, then decide you’re going to write a book about your life and condition to educate others, then create an entire system to effectively use your own method of morse code to dictate your thoughts?! It’s absolutely astounding.
This incredible novel was published in 1997 and Bauby passed away from pneumonia two days later at the age of 44. I feel emotional writing about Bauby and his novel as this little 160-page book has inspired an uplift in research for LIS as well as millions of copies of the novel being sold, a film was also created based upon Jean-Dominique Bauby’s life in 2007 of the same name, I haven’t watched it and to be honest, I don’t know if I will, this book is so incredible that I don’t want to ruin or cheapen it by watching a film that Bauby never had any part in.
In short, I do agree with that Pinterest list. This small book could be the single most important and influential book I have ever read. It makes you step back from your own life, not to just appreciate what you have but to realise that even in the worst possible stages of life, people like Bauby can create something beautiful that stands to live well beyond their lifetime.
I got my book as a gift at Christmas but I've seen it in a used condition online for around £4. If you’re looking for something far different than the usual non-fiction that drags us away to other worlds, spend a couple of hours appreciating the life and works of a man who puts our real world into perspective.
H x
Book Review Books France