During our little break to Cornwall, I wanted to try and eat as many vegan/veggie Cornish pasties as I could, unfortunately, there weren’t quite as many meat-free options as I thought there would be (if you want to read about our Cornish adventure then click here) so when we came home I was inspired to make some vegan pasties of my own!

I did some research and found out that a traditional Cornish pasty is made by cooking the filling and pastry all together at once rather than pre-cooking the filling, I did actually pre-cook my filling and made a little vegan stew which I then put in some pre-made puff pastry and then baked. Although these aren’t traditional-style pasties, I think they came out brilliantly and for a vegan alternative, I think they’ll hold pretty strong in a pasty lineup! 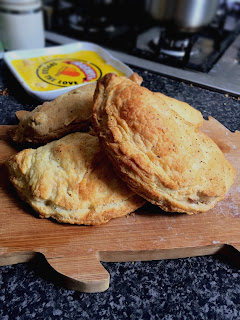 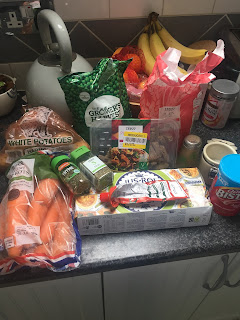 Start by cooking the beef on medium heat with a tsp of oil, and a pinch of salt and pepper in a medium-sized saucepan. Let it cook for about 10 mins until it starts to brown and firm up, it doesn’t need to be fully cooked as it’s gonna be cooked again inside the pastry. Once the beef is cooked add in the potato, carrot, thyme, sage, tomato puree, gravy, and stock cubes on low heat. Whisk the gravy until the stock cubes have melted then season with salt and pepper. Let this simmer for around 20 mins until the gravy starts to thicken up. 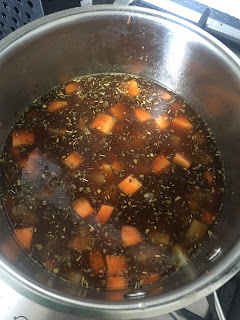 You may need to keep the filling simmering for another 10-15 mins until the diced carrot and potatoes are soft, you can also add your frozen peas at this point. Once the veg is soft and gravy is thick, take it off the heat and allow the filling to cool until it’s room temperature while we prepare the pastry. 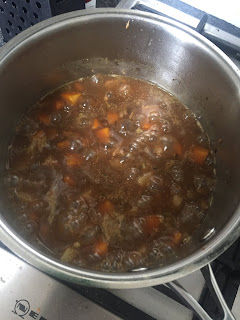 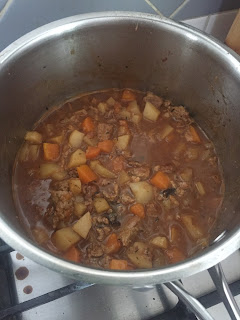 Now onto the pastry! Un-roll one box of pastry at a time onto a clean, lightly floured surface, I used a saucepan lid as a cutter because it was the best size, but something about 5 inches round should give you good-sized pasties. I got two pasties per box of pastry, so I re-rolled the pastry to make more and save on waste, when re-rolling just remember to still keep the pastry about the thickness of a pound coin otherwise it may split when baking. 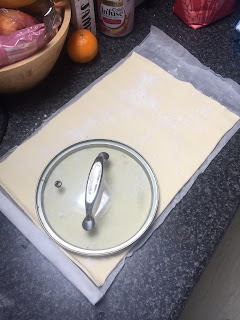 Preheat the oven to 200C/ 180 Fan/ Gas Mark 4. On a greased baking tray or silicone baking mat, take 2 pasties at a time. I used around 2 tbsp of filling per pasty, we want it to be full but not too full so that it explodes! Keep the filling on one side of the pastry. 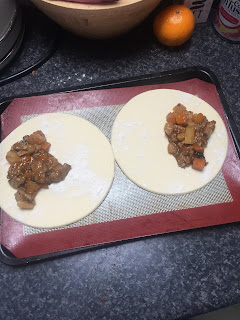 Wet your finger with water and run it around the edge of the pastry, before folding the empty side over the top of the filling and VERY GENTLY press down to seal, don’t crush the edges. Now here's the tricky bit I haven’t quite mastered yet, we want to create that crimp on the pastry that the pasty is so famous for. To do this, squeeze a portion of the pastry edge together (about the width of your fingernail) to crimp it, then gently push it to the side so it looks like a wave, repeat this all the way along and then fold the thicker edges at the end back across to seal. Make a small slit with a sharp knife across the body of the pasty to let the air out whilst it bakes. 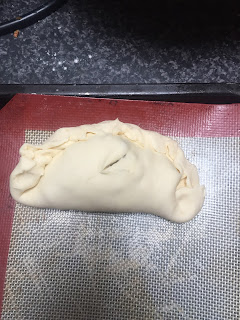 Brush the pasty with vegan margarine/butter and sprinkle with salt and pepper. Bake them in the oven for 20-25 mins until the pastry has puffed up and darkened in colour. Once baked, leave to cool on a wire rack for around 10 mins, or eat straight away with chips and salad!! 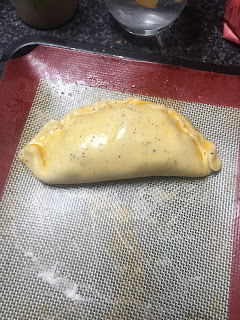 For once I was genuinely happy with these, I think they came out almost exactly how I’d envisioned them and the taste was way beyond what I had imagined! If I had to be picky, I would have liked some more colour on the pastry, but I didn't want them to burn, so maybe a better vegan glazing agent would make all the difference.
I think this recipe is pretty simple and the filling is made in one pot so there's not too many elements to keep a check on. Overall I think this took about an hour but you end up with at least 10 decent sized pasties that will not only serve for dinner but perfect cold for lunch the next day, you could warm them back up in the oven on 200C/ 180 Fan/ Gas Mark 4 for about 5-7 mins or in the microwave for a minute. They should keep fresh for at least 3 days, I put mine in a sandwich bag in the fridge, and to be honest they only lasted 3 days before I ate them so I can’t really say whether they’ll last any longer for you!
I’m really proud of what I created here and I just think it shows how tasty vegan food can be and how simple it is to make something this tasty! I hope you find time to try this out because I promise you won't regret it.
H x
Cornwall Dinner Easy Recipe Food Lunch Snacks Vegan Vegetarian