Hidden deep in the Essex countryside is a secret nuclear bunker that the government didn't want us to know about…until now. Kelvedon Hatch Nuclear Bunker in Brentwood is the perfect amount of spooky and informative to keep you entertained across its 3 levels, it’s open to everyone but the day we went was even better because there was literally no one else there except the owner in the gift shop. Imagine getting to walk around an out-of-operation nuclear bunker alone?! Well, we got the opportunity a couple of months ago and I’m here to tell you all about it! 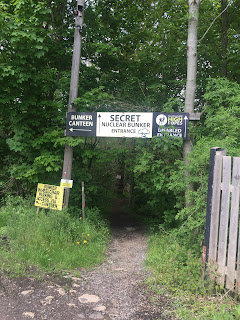 We had planned to go here for months but due to the lockdown it wasn’t open, as soon as we heard it had re-opened we knew this was the place we were going on our next day off, it took us about an hour to drive there but as soon as got into the town of Kelvedon Hatch and started winding our way through the small wooded roads, we knew we’d come to the right place. You pull into the compound and it's at least half a mile drive until you actually reach the car park, this only adds to the apocalypse-type vibes (and you have to remember there was literally no one else around either so it was even creepier), we got parked up and saw around us all the different things this place had to offer besides the bunker; it has an assault course, axe throwing, paintballing and tree-top walking but we weren’t here for that today.
You walk under the “welcoming” nuclear bunker sign, through the woods, and up to a rusting iron fence, walking through the fence you get into this little front yard…except it’s not full of flowers, it’s full of these… 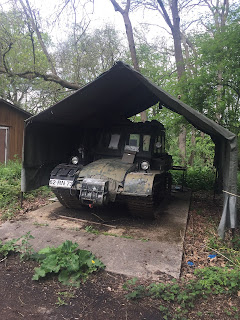 Vintage military vehicles as far as the eye can see! You weren’t able to get inside them but you could touch and walk all the way around them, then you turn to face the house that the bunker is built underneath. Again, it’s hard not to think you’ve fallen into an episode of 'The Walking Dead’ as you’re surrounded by nothing except woodland, abandoned military vehicles, an abandoned-looking house, and silence. There is a plaque outside the house explaining that this entire house is a facade meant to fool enemies into thinking they’d come across a normal family home when in reality the government had planned for almost 600 people to survive underneath in an air-tight bunker.
Walking into the house they have a lot of memorabilia and cool artifacts, one of these being a wooden sign outlining the current nuclear threat to the country…if that sign changes to red, I’ll meet you there! 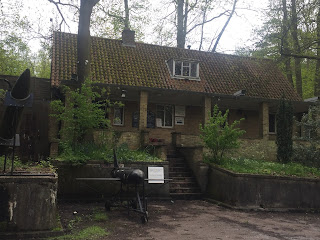 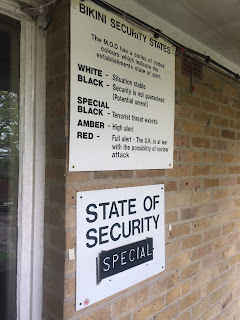 Unfortunately, I don’t have many more pictures to show you as we weren’t allowed to take them inside the bunker. There was a sign at the entrance saying taking pictures of any kind (both professional and just for memories) is prohibited without paying them £5 for a photography license…I know it’s only £5 but we didn't know this going in and I was a little put-out, to be honest. Yes, it’s a government/military facility, yes, there are supposed “top secret” documents that are now on public display, but if you didn't want any of that released to us all then why bother to showcase it in the first place?!
Never mind, if you want to take pictures just pay £5 and snap away to your heart's content. I’ll describe the place to you instead.
Walking down the little steps into the initial tunnel you feel a bit weird like you’re entering another world and when you get down into the tunnel that’s hundreds of metres long there is a sign on the wall saying that the electricity does go out frequently because you’re underground and not to panic (good luck), fortunately, we had light all the way around but it would have been terrifying without it.
They had little radios to take around with you that explained all about the history of the bunker but we tried a few different ones and couldn’t hear a thing from them so we abandoned that idea and just read the information boards as we went around which explained everything perfectly anyway.
So you walk through the tunnel, get to a HUGE iron door that must be at least a foot thick, walk past a munitions cage full of shells and various weapons, and then you’re safely inside the bunker. As I mentioned before, the bunker is split into three levels (not including the ground level where you enter and exit).
The first level is 80ft underground and here, you get to enter the bunker and see the inner workings of the machinery that kept the bunker running, this meant how to pump water, electricity, and clean free-flowing air throughout to ensure that everyone didn't suffocate. On this level you can look up from the bottom of a stairwell to the corrugated roof on the top and see the sunlight, it was quite eerie to know how far down we were, down here as well I also saw what looked like two people sat in the pitch-black darkness behind some machinery, the bunker is full of life-like dummies so let’s just say it was two dummies that weren’t being used…probably.
The second level is the government level and included a room full of computers and radios that would be used to speak to other military bases throughout the country, as well as to look out for and coordinate nuclear attacks, there was also a corner that was a bit scary, it was the broadcasting room made for The BBC, where they could speak to any survivors and issue safety warnings and radiation levels out to the public.
The third level was used for accommodation, there were male and female dormitories crammed full of bunk beds as well as separate bathrooms and washrooms. I just want to make a point here that I do believe in ghosts and the paranormal and am actually very passionate about it, I was expecting this place to have a really creepy vibe but I didn't get that at all. The only place I felt uncomfortable was in one of the male dormitories where I stood in the middle of the doorway (I felt like the door would shut otherwise) and I had to get my partner to check there was an open way out on the other side before I even stepped in the room when I did walk in I touched one bed and then power walked my way past all the others until I got out. That was super weird and I've never had that before…so maybe we weren’t fully alone.
After that, you’re back up at ground level and into the gift shop! You don’t have to pay until you end your trip back up there so you can walk in and fully enjoy the experience without having to queue at the start to buy a ticket. The ticket price is £8.50 an adult and £6.00 for children, I think it’s well worth going to, not only is it very informative and interesting, there is so much there to look at as well as all the other outdoor activity stuff there too.
So on the way out, I could finally take some pictures again, I think from this exit way you can see why people come here to film horror/zombie/apocalypse films, just look at this long tunnel and tell me you aren’t being chased out of there by zombies!! 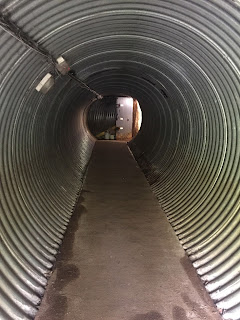 Once you finally get back out to the “real” world, all you can see behind you is a hole almost completely covered over by bushes. 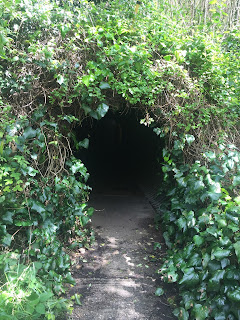 This was definitely an experience and a great day out for both of us, there is a real vibe of history to this place and if you’re able to get to Kelvedon Hatch for the day then the nuclear bunker is well worth exploring!
H x
Adventure Days Out History Horror Travel UK