Something I always thought would be simple and easy to make for yourself is crisps. I’m always looking for new things that we can make at home rather than going out and buying, and when a recipe only involves potatoes, a bit of sunflower oil, and salt, how could I not try it?! Obviously, because of the simple ingredients, they are fully vegan and I decided to try out two methods of cooking them, when I was looking into the process I'd seen that a lot of people just bake them in the oven, but others were using an air fryer, they said it was quicker and the crisps came out crunchier than in the oven, I made a double batch (approx 100g) and put half in the oven and half in the air fryer to test out which is better. I’ve written out a method to show you this very basic process but it takes less than 20 mins to do this so if you can master crisps you can make these as a snack any time you feel like it, and know that they’re not full of rubbish like supermarket crisps! 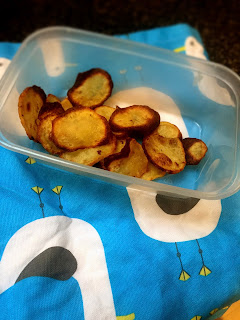 Ingredients
Makes 100g
2 medium-sized Potatoes, peeled
1 tsp Salt
1 tsp Sunflower Oil
Method:
See how easy that is?!
I know these aren’t perfect but I'm pretty happy with the crisps as a first attempt, they tasted incredible when they were warm out of the oven but as they started to cool down they started to have a chewy-type texture and lost their crispiness, so I'm not sure what I did wrong there but I will try again eventually, but if you want to make crisps that are warm and crunchy straight out the oven then this recipe is perfect and you’ll have no problem, but as crisps are usually eaten cold I'm not quite sure how to make sure they stay crispy as they cool, if you have any ideas please let me know!!
I only used the basic salt and oil combo on them this time but you could add anything you want to; vinegar, paprika, dried cheese with chives, anything you like the sound of is so easy to sprinkle on the top of these crispy, tasty potatoes!
H x
Easy Recipe Food Homemade Quick Recipe Snacks Treats Vegan Vegetarian