We are already coming to the end of august (and coming to the end of summer by the looks of things here) so I thought it was time for some seasonal ingredient recipes, this month we’re focusing on sweetcorn. I did some research and found a few scone ideas that I really liked the idea of, you can never go wrong with a scone whether it's filled with jam or cream, or apparently even cheese and sweetcorn!

These crumbly, buttery scones are the perfect snack or accompaniment with a stew or soup and they’re so simple to make! I’ve made a video for this one because there really isn’t too many steps, so I’ll leave the video with a full recipe down below.
Ingredients
Makes 7
125g Sweetcorn
175g Self-Raising Flour
1 tsp Baking Powder
1 tsp Yellow Mustard
1/4 tsp Paprika
1/4 tsp Dried Thyme
25g Butter, cubed
90g Cheese, sliced
90ml Milk
2 tsp Lemon Juice 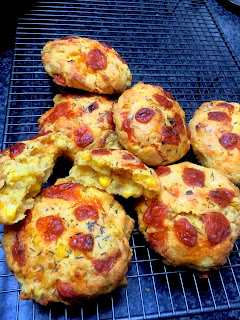 I LOVE the way these look! The red Leicester kind of looks like pepperoni pizzas, or fancy sun-dried tomatoes which have given me lots of other savoury scone ideas but for now I think these look better than I had expected. I don’t think I would recommend Red Leicester as cheese for this as it is quite a hard cheese and it didn't really melt it just went gummy on top and kind of tacky, but I think if you used cheddar or a softer cheese you’re going to end up with a delicious gooey topping. I was impressed with how the sweetcorn worked in this too, it adds a slight bite to an otherwise soft dish and obviously adds a lovely sweetness to a savoury flavour. These scones are very crumbly and soft, I don’t think that's a bad thing but you couldn’t slice them and use them as mini rolls, they would need to just be eaten as they are which is why I say they’re good as a snack on their own or to dip into stews and soups.
But overall I think they look great, taste great, were easy and quick to make and they open up an entire savoury scone world for me to explore!
If you’re looking for a new lunch snack or something to add to the side of your dinner plate, then you should definitely give these scones a try. I promise you wont regret it!
H x
Baking Easy Recipe Food Lunch Quick Recipe Seasonal Snacks Vegetarian