It’s been a little while since I’ve written a book review, but I’m back with a heartwarming historical read!

Until Tomorrow tells the story of the Ryan family who owns a successful family bakery in the heart of Liverpool in the 1930s. There is a mother and father; Kathleen and Micheal who struggle to keep the bakery afloat but with help from all 5 of their ambitious children seem to get by day to day and sell much-needed bread and cakes to the locals.
The 6 ambitious children are; Rita, the eldest who is a soon-to-be qualified teacher, teen Shirley-Anne who dreams of performing on world stages, Chris; who is a simple man and just wants to help his parents run the bakery, learn the tools and eventually take over from them when they’re ready, Joey the second youngest who helps out where he can by running deliveries but is really more interested in playing out with his friends from school and causing trouble and finally Liz the middle daughter, still a teenager but seemingly one of the most mature children still living at home in the bakery. 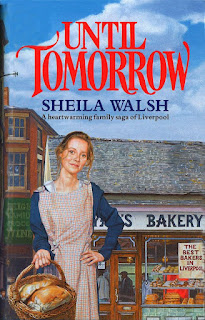 Picture from Penguin.au
This family trundles on until WWII hits England, not only are they forced to use fewer supplies because of rationing, but Liz sees first-hand the danger of the war as she begins to help her granddad as a nightly air-raid warden. Caught up in all this is her engagement to her childhood sweetheart Jimmy, who inevitably has to go off to Normandy with her brother Chris and a new love interest in her life emerges; Leigh, an American fighter pilot.
I won't spoil too much for you because this book is a great read, but the story mainly revolves around Liz, her struggles between Jimmy and Leigh (which is no normal soppy love triangle), her want to keep the family business afloat in difficult times but also her emerging talents for baking and patisserie which are cherished by a small-time Austrian character with a big heart, Fritz Lendl.
The family sees births, deaths, business rise and fall, loss and betrayal as well as a few happy endings along the way too.
I loved reading this, it was very different from the usual gory horror and crime books I tend to read but it was well worth it, Walsh explains each character with such a depth that you can’t help but become attached, especially Liz as you see her blossom into this incredibly ambitious, loving and intelligent young woman in a time when the war would make anyone unforgiving.
Walsh tells the factually correct side of war-time living for both rich and poor alike, especially in Liverpool as well as the good that can come from chance encounters.
I enjoyed this book so much I’ve already lent it out to one of my friends and I'm hoping when she’s done with it I can give it to someone else!
Walsh has released a huge number of books since her first was published in 1983, I will be looking out for her first book ’The Runaway Bride’ which tells the story of Consuela Vasquez, a beautiful Spanish girl brought to England, where she quickly learns female independence and the love of a British man. I’m more interested in reading this because it’s her first book so I’d like to see how far her writing has come.
Walsh is still publishing books to this day, her newest novel ‘Holding On When You Want To Let Go’ gives us a deep insight into her Christian roots and how her love of God has helped power her through her most difficult times. I am in no way a religious person so I don’t know if I would read her most recent books which all centre around her religion but I will be looking out for her earlier fiction novels!
I found Until Tomorrow at a supermarket book donation so I only paid for it with the change I had in my purse but I have seen it in a used condition online for £3 if you did want to grab a copy for yourself.
H x
Book Review Books Charity Shop Buys History Sustainable Buying UK