Are you itching for a good old British mafia murder crime thriller by one of the best crime authors in the game? I thought you might be. Revenge by Martina Cole offers you everything you’ve been looking for; murder, drugs, gangs, romance, betrayal, and some very interesting characters dropped in throughout.

The book centers around Micheal Flynn, a dangerous man who worked himself up from the bottom of the gangland chain and is now one of the most powerful and feared men in the whole of the UK, working alongside his mentor, famous gang boss Patrick Costello and a handful of other cronies. Micheal is both employing and working alongside British police, constantly lining their pockets to look the other way when a suspicious crate arrives at the docks or another unsavory character ends up dead in the middle of the night, but who is Micheal supposed to turn to when his own daughter vanishes without a trace?
Micheal fights every second of the day to try and find his daughter, whilst receiving ever horrifying information of the abuse and torture she’s having to endure, he doesn’t know who is doing this, or why, but he knows that as soon as he gets a whiff of the culprit, they’re gonna wish they’d never crossed his path. 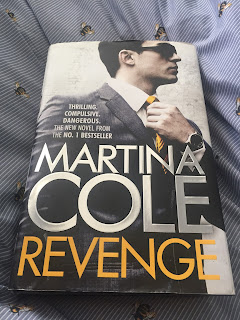 I hope I made that sound exciting because that's exactly what this book is, jumping from Michael's younger years when he was still working his way up, the close-knit family ties that pull and push him in all directions, and then of course his “day” job that enables him to have a billionaire lifestyle whilst rarely having to get his hands dirty (only when a point needs to be proven).
I’d never read anything by Martina Cole before but I’d seen lots of her books on charity shop bookshelves before so I knew she was popular, I also didn't know she writes crime novels but of course, now I've read one, I completely understand the appeal.
Cole never seems to stray too far away from the storyline, there are no huge flashbacks that last page after page and draw you away from the actual story, they only serve to deeper explain the main storyline and build the life that surrounds each character.
I really enjoyed reading this, I think it was just over 500 pages and I read it in about 4 days because I just couldn’t put it down, once you find out who’s holding Michael's daughter captive you just can’t wait to see each step closer that he takes to find her as well as the realisations about his own career, life, and family that he makes along the way.
I found this book in a charity shop but it came out in 2013, if you’ve already read this one and you’re interested in what came next, Cole released a book called The Good Life in 2014 which centers around Cain Moran, much like Michael Flynn, Cain was a king of the underworld but when he’s sentenced to life in prison his world, his lover Jenny, and his career may just come crashing down…that one sounds pretty good!
I’m currently reading a HUGE book about astrology and the connections between each star sign, it's really interesting but it's about 1200 pages long, and it's taking me a really long time to get through, but I promise as soon as I'm finished with it I’ll tell you all about it!
If you’re interested in Martina Cole's book ‘Revenge’, have a scout around the charity shops as I know there's always plenty of Martina Cole books on offer, if not I've seen it in a used condition online for £3.50!
Happy reading!
H x
Book Review Books Charity Charity Shop Buys Crime Eco Friendly Sustainable Buying Thriller