Dare I say this is one of the first autumnal recipes of the year! These crisp, rich and sweet little pies have the perfect blend of tart Bramley apple and super-sweet plum with just a hint of cinnamon and golden syrup to gently draw you into the colder months. Originally I was gonna use apple and pear but I thought that was a bit unoriginal, then I thought about apple and peach until I saw these plums on the reduced aisle and I thought it was worth a go. These pies are fairly simple to make, the “rough puff” pastry is a simple version of classic pastry, by folding the pastry on top of itself when rolling, you create thin layers that will puff and flake during baking to create a lovely crisp pastry that uses only flour, salt, butter, and water! The pies take a bit of chilling time whilst creating the pastry and prepping the fruit but they’re easy to assemble once that's out the way. 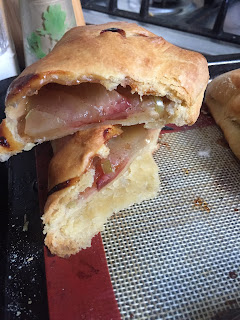 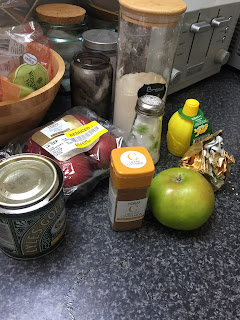 Start by mixing flour and salt in a medium bowl. Take the cubed butter and push it through your hands to combine with the flour, continue this until the mixture looks like large, soft breadcrumbs. 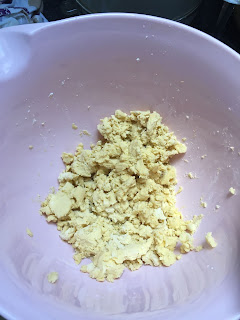 Make a well in the center and pour in the water, with a wooden spoon mix the dough and water together until you have a rough dough, you may need to add more water or flour depending on how loose or dry your dough is, get it into a loose ball then chill in the fridge for 20 mins. 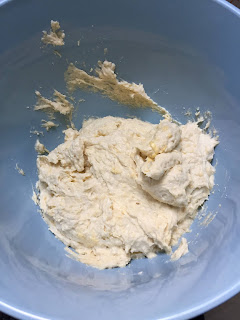 Once chilled, take the dough from the fridge and gently knead just for a minute on a lightly floured surface, to bring the dough together more neatly into a ball. 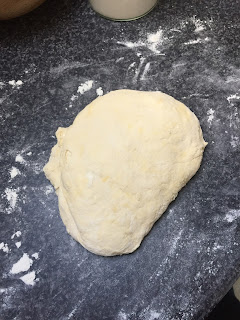 Roll the dough out into a rough 15x20 cm rectangle, divide this into 3 sections but don’t cut it. 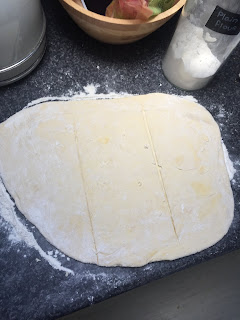 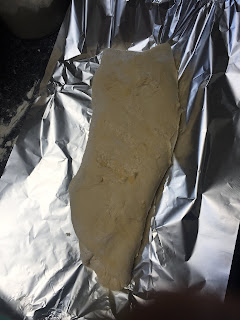 Preheat the oven to 200C/ 180 Fan/ Gas Mark 4. In a bowl mix all the filling ingredients together until combined. 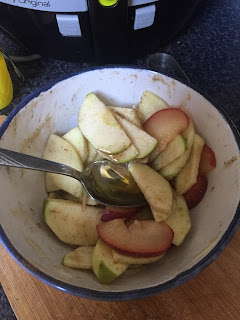 Take your dough from the fridge and divide it into 4. Roll each section out into 30 cm square…obviously, I can’t roll things out evenly so just imagine mine is a square. 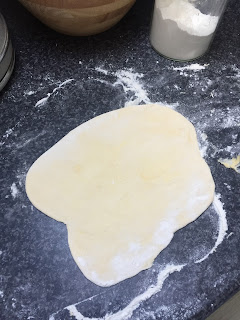 Evenly arrange each fruit slice down the middle of the pastry squares, take one side and fold it over the fruit, take the other side and fold it over the first side then gently press down the pastry with your fingers to seal, repeat with both ends then transfer to a greased baking tray or silicone baking mat with the seam side down. Once on the tray make 2 or 3 slashes down each pastry to let the air escape. 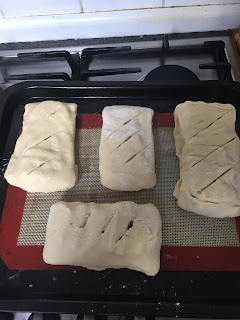 Finally, brush each pie with milk or egg for a golden colour, then bake in the oven for 35-40 mins until slightly puffed up and golden brown. 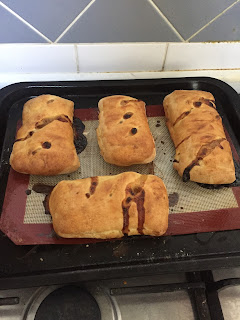 These came out better than expected! I have to be honest and say that the pastry was VERY thick in places, especially where I had folded the ends under but the filling was great, it had a great sweetness from the plum and equally as delicious sourness from the Bramley apple, all of this cozied up inside some tasty pastry. Although the pastry may have been a bit thick I think it was a great attempt at this “rough puff” pastry, it might not have been flaky it was more of a shortcrust but it baked well, tasted good, and held the filling inside without exploding or breaking apart so I say that's a win for me!
I think these are good for people who have a general understanding of baking but could still use practice when it comes to making and baking pastry, and they’re perfect for some cozy autumnal baking on those ever-approaching rainy days!
H x
Autumn Baking dessert Easy Recipe Food Snacks Vegetarian