We’re back into the World Series and now we’re in Egypt with a quick and simple brunch recipe called Eggah. Made with an egg base and usually vegetarian ingredients such as onion and pepper, then scattered with fresh herbs and spices like cinnamon, turmeric, or coriander but Eggah can sometimes include chicken for heartier versions. This traditional omelette/frittata style dish can be made in less than 20 mins and keep you going all the way to dinner time! When I was looking through some traditional recipes I saw that an Eggah is commonly made as an appetiser or side dish but can be eaten as a main course (it’s not particularly heavy, so that’s why I'm saying I’m using it as a brunch or lunch recipe) and is eaten not only in Egypt but in Lebanon and across almost the whole of The Middle East. I made a little video for this one because it is pretty simple, but I’ll leave the full recipe down below as usual! 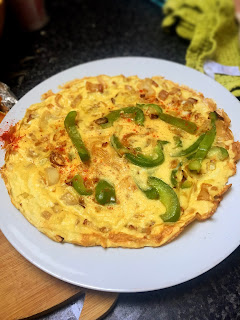 I really liked how this turned out! I fully expected it to burn to a crisp (mainly because of my cooking skills) and when I was making the egg mixture it didn't look like a lot but it went far and was surprisingly fluffy. I would definitely make this again, trying out different ingredients like courgette or some vegan bacon and maybe more egg so it's even fluffier than this one!
I chose to try making Eggah because I visited Egypt on holiday about 12 years ago with my parents, I remember visiting the Valley of The Kings, seeing the incredible tombs and of course the pyramids, I remember going on a small riverboat down the Nile and learning about so many stories from ancient Egypt from our great tour guide, Moody! We stopped at one place and had lots of traditional Egyptian and Arab cuisine, but the standout dish for us at the time was this meal called Brik, which is similar to this Eggah except the egg is folded over and sometimes encased in triangular pastry.
It was lovely to reminisce about that incredible holiday and learn a new recipe at the same time, if you haven’t been to Egypt I hope that someday soon you’re able to travel there, it’s one of the most beautiful places I've ever been, but for now, you’ll have to contend with my very basic rendition of an Eggah!
H x
Africa Breakfast Easy Recipe Food Lunch Middle East Quick Recipe Vegetarian World Series