This time in the World Series we’re off to Denmark! And we’re making a traditional dinner recipe for Frikadelle (Danish meatballs). Frikadelle are small patty-shaped meatballs that are said to have originated from a mix of the German Frikadelle and Italian Fritellia, it is essentially a mix of two types of meat, usually veal and pork but obviously, we don’t eat meat on this blog so I got myself some vegan mince instead. You can add anything you want into the meatballs, such as leftovers from dinner the night before, so these are very popular to make from potentially wasted food and had as lunch the next day, either hot or cold, I’m going to have mine as lunch just on their own with the creamy sauce/gravy that I made to go with it. 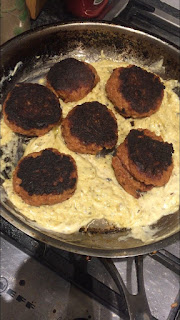 And that’s how you make Frikadelle! I was really happy with the meatballs themselves, I had no idea it was that easy to make them, it was just the gravy/sauce that didn't really go the way I'd planned, I think the heat was too high and the cream split in the pan so it wasn’t able to simmer and make a thick gravy it just made a weird thick paste which didn't look very appetising, but I tried the meatballs and apart from being a little too salty they were delicious! The process itself from making the meatball mix to cooking up only takes about 45 mins, so these could be made for dinner any day of the week.
This is what I love about the World Series, I get to try all sorts of different recipes that I wouldn’t ever have thought to try before, now I've made these, I can make my own meatballs whenever I feel like it for all sorts of dishes!
I hope you find time to give this recipe a go, as it’s pretty simple, fun, and a skill in the kitchen that can be used time and again.
H x
Dinner Easy Recipe Food Homemade Lunch Vegetarian World Series