I can’t lie that for whatever reason I've been feeling very unmotivated (which is surprising because autumn is my favourite time of the year and I've been looking forward to creating these posts all year), maybe I put too much pressure on myself but since we’ve been back from our mini-break to Manchester nothing I make seems to work out how I wanted it to, nevertheless, I will show you what I created and just hope you get the idea, haha! For this Halloween recipe I wanted to make 12 mini-muffins in 3 fun designs, my idea was 4 “half and half” vanilla and chocolate, 4 pumpkin and 4 “oozy slime” muffins, as you’ll see both the pumpkin and slime ones didn't quite go to plan but I was genuinely impressed with the half and half cupcakes and I'll definitely be using that technique again in the future. I also had the idea to use up some of my green fondant icing, cut out pumpkin faces and cover half of the muffins with cute pumpkin faces, but that didn't really come through either…but never mind! 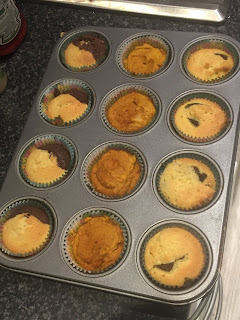 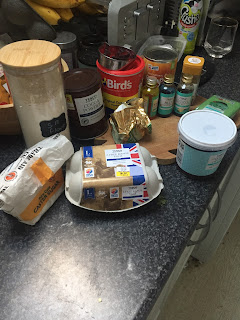 To make the initial muffin recipe preheat the oven to 180C/ 160 Fan/ Gas Mark 3 and line a 12-hole cupcake tin with cases. In a large bowl whisk together the butter, vanilla and caster sugar until it's smooth and creamy. 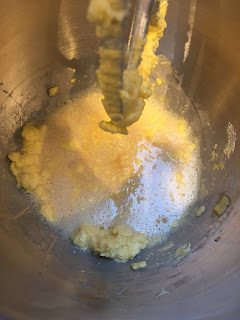 Add in the eggs and flour then stir until you have a smooth and thick batter with no lumps. 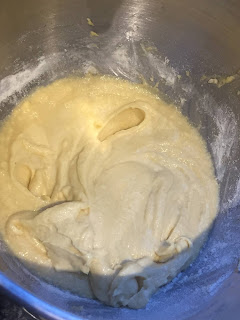 Separate the batter into 3 bowls, in your first bowl, split this again in half and in one half add your cocoa powder and mix well. In the muffin tin, put a piece of foil in the centre of 4 cases, wide enough that no batter can slip underneath or around the sides. Pour vanilla batter in one side and chocolate batter in the other into all 4 cases, smooth over each side then GENTLY remove the foil. 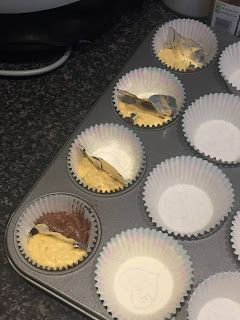 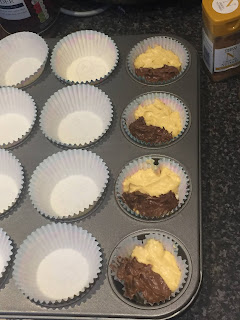 For the second box of batter, mix the pumpkin pie filling into the batter until it’s fully combined, taste it and see if you need to add any more, we don’t want to overwhelm the taste but it should have a definite taste of pumpkin. 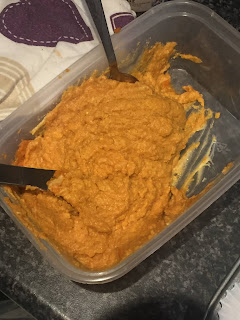 Pour the pumpkin batter into another 4 cases and smooth over with the back of a spoon. 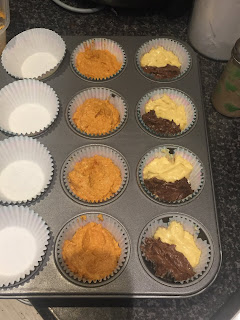 For our third and final batch of muffins, make the custard according to whatever custard you choose to buy then add a few drops of green food colouring into the custard and mix until you get your desired colour. Spoon enough of the third bowl of vanilla batter just to cover 1/4 of each case, spoon a tsp of custard “slime” on top then fill each case to 3/4 full with the remaining vanilla batter. 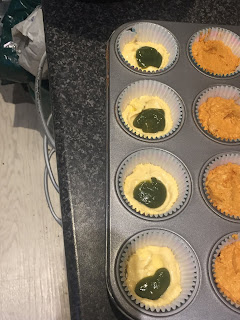 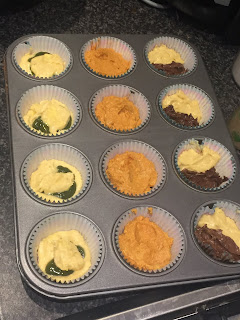 Transfer the muffins to the oven and bake for 15-20 mins until a skewer inserted into the centre comes out clean. Leave them to cool for 10 mins before placing them on a wire rack to cool completely. Overall, it wasn’t a bad effort, the thought was there for these cupcakes to be brilliant I just think unfortunately I wasn’t able to pull it all together. The Half and Half muffins tasted really good and I think they looked pretty good too, my pumpkin muffins I didn't even try because I had added way more pumpkin filling than needed (I used ALOT more than the 1 tbsp that I advise in the recipe) and the slime cupcakes were ruined by the fact that I added too much food colouring to the custard so the custard tasted of chemicals which obviously wasn’t the taste I was going for.
I’m all about honesty over here, so even though 70% of these muffins were an absolute failure, I wanted to show the entire process anyway in the hopes that you can try for yourself and come out with something that won't be a failure and will impress your friends, family and of course, yourself!
The general mini muffin recipe before we add anything is really easy and if I had to choose I would say focus on the half and half or the slime cupcakes, just make sure you keep that foil barrier in until you have both sides of vanilla and chocolate batter in the case for the half and half and with the slime, make sure you taste the custard as you’re adding the food colouring in so you know it’ll still taste good!
With that, I’ll leave you now as we get closer and closer to Halloween and the nights are getting darker and colder… at least we can stay in the warm and experiment with mini muffin recipes!
Only 11 days until Halloween!
H x
Autumn Baking dessert Food Halloween Vegetarian