We’re still travelling around the world with food during Halloween, and I've got a really fun German flatbread recipe for you that's just perfect for any age to make and enjoy! This time we’re off to Germany with a bread recipe called Flammkuchen, although popularised in Germany, Flammkuchen actually originates from Alsace; a small area of north-eastern France that follows the Rhine river. This dough is usually rolled out super thin into an oval or circle (much like a pizza) then covered with a thick cream like sour cream or creme fraiche and usually has a topping of onions and pork lardons, but obviously, we’re doing a veggie version! This pizza-type dish is usually eaten as a group meal, cut into squares or long slices it can be eaten fresh from the oven with friends and family as a lunch/snack …and an answer to the burning question? Flammkuchen translates to “Flame Cake”, I'm assuming because of its doughy consistency but thin-stone baked look. Our Flammkuchen lives up to its name as I've used food colouring gel to turn the dough black and added a cute dough-skeleton friend to complete this Halloween themed dish. I’ve made a video for this one, which I’ll include down below with a full recipe! 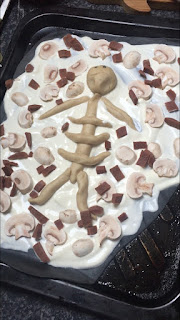 Look at my skeleton Flammkuchen! I was so happy with how this looked, the topping of mushroom and vegan bacon was delicious but I wasn’t all that keen on the creamy base, I don’t know whether I didn't add enough salt and pepper or nutmeg but it was lovely and creamy, it just didn't have alot of taste. Thankfully, my skeleton cooked through in time and was an adorable addition to the bake, I loved how simple it was to create this skeleton and I think you can tell what it's supposed to be. The recipe itself is simple and although it includes alot of steps I think this is suitable for any age and it’s a quick meal for weeknight dinners too! I don’t know if I’ll be making Flammkuchen again in a hurry but I certainly enjoyed trying out this recipe that I've never heard of and learning about a new cuisine, whilst also adding my own Halloween twist, in regards to the dough colour, if you don’t want to add food colouring you could add activated charcoal, that would work much quicker and you wouldn’t need to use much at all, I've never worked with charcoal and to be honest, wouldn’t know where to buy it from so I just went with food colouring for this first attempt, but you best believe I’ll be making alot more spooky black dough from now on!
There’s still another World Series Halloween recipe to come, and next time we’ll be going to Hong Kong!
Only 19 days until Halloween!
H x
Autumn Baking Dinner Europe Food Germany Halloween Lunch Vegetarian World Series