on October 29, 2021
Finally, another World Series recipe! Ok, so this one isn’t to do with Halloween (sorry) but as much as I LOVE Halloween and autumn, I know there are some of us that really struggle to come to terms with darker days and colder nights so I've decided to take us to Hong Kong and make some (sort of) summery Pineapple Buns! These warm, sweet soft on the inside and moreishly crunchy on top buns originated in Hong Kong and is actually recognised by the Hong Kong government as part of their cultural heritage. For anyone familiar with Pineapple buns you’ll know what I'm about to say but for all of those who aren’t, just wait for it…Pineapple Buns actually traditionally contain no form of pineapple ingredient, the pineapple element comes in to describe the crispy top that looks like the body of a pineapple!
Po Lo Bao is traditionally served in bakeries and you can get the most famous version, Boh Loh Yau which features an inch thick wedge of butter as a filling for the bun, the pineapple buns are usually eaten as a single portion as either a dessert or a sweet snack. I won't be trying to replicate the buttery pineapple buns here today but I will be making them as traditionally as I can and then of course adding a little pineapple feature for a bit of fun, my plan is to make a simple sugar syrup, add in a few splashes of good quality pineapple juice and brush this over the top of each bun once baked so they have a sticky, sweet pineapple glaze!
I’ve made a video for the process, and it is quite a process! But I’ve had alot of fun making them, as always I'll leave the full recipe down below.
Ingredients
Makes 12
Tangzhong
20g Plain Flour
75ml Hot Water
Dough
145ml Whole Milk (I used sweetened soya)
20g Granulated Sugar
7g Dried Yeast
500g Bread Flour
1 tsp Salt
80ml Condensed Milk
1 Egg
60g Butter, Melted
Crunchy Crust
60g Butter
100g Caster Sugar
1 tsp Vanilla
100g Plain Flour
1/4 tsp Baking Powder
1/8 tsp Turmeric
1 Egg Yolk
2 1/2 tbsp Custard Powder
1 Egg combined with 1 tbsp Milk for an egg wash
Pineapple Syrup
100ml Water
100g Caster Sugar
2 tbsp Pineapple Juice 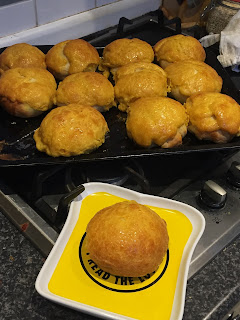 I can’t express how proud I am of myself for actually getting through this bake! If you’ve read a couple of the more recent recipes you’ll know I was struggling with just seeming to fail each time, but I think I've clawed my way back with this one. I know they aren’t perfect, some of them could definitely have had crispier tops to really show off their pineapple look but the last thing I wanted was for them to burn or for the bread to become dry and thankfully, that didn't happen this time. This recipe was probably one of the most difficult tasks I've ever undertaken on the blog, there were so many different bits to remember and piece together but I think I did an alright job, and as long as you have some baking knowledge (and plenty of time and mixing bowls) under your hat, there's no reason you can’t attempt these delicious buns too. I’m really happy with how the pineapple syrup stuck to the top of each bun as well, it gives that instant hit of sweetness as you crunch through that delicious topping. Before looking up an idea for this week I'd never heard of pineapple buns, mooncakes or the mid-autumn festival in Asia where all of these incredible dishes come from, I know I say this almost every time but I'm always so grateful for everything I learn with each World Series recipe. Through pineapple buns, I’ve found a recipe that I want to add to my Christmas baking list and show off to my family! I hope that someday soon I'll be able to visit Hong Kong and try a real pineapple bun, but for now, I'll have to munch away on all of these!
Only 2 days until Halloween!!