I’m carrying on the updates from our mini-break away to Manchester last month, obviously the day before this we visited the Jewish Museum, which you can read about here, but for our next day out we decided to take a trip down memory lane to one of the first places my partner ever took me when I used to go and visit him all those years ago.

I LOVE museums, I would much rather spend my day at the museum, zoo, nature reserve or anything to with nature and history, I'm just obsessed so when my partner suggested we take a trip back to the science and industry museum I was so excited! The museum is free to visit but you have to book your free ticket in advance so they can keep a check on capacity numbers, but I think you’ll agree once you’ve seen it, that this museum is worth far more than it’s free ticket. 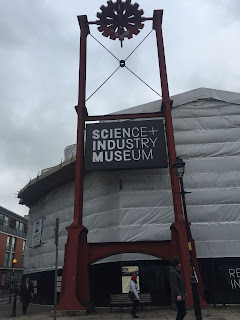 We started by taking a walk through Manchester City Centre as we’d parked about 25 mins walk away from the museum, but we got to reconnect with the city a bit AND we got to see all the cute pumpkin decorations the council had put on the trees for halloween! I used to love seeing how much effort the city would go to to decorate for each season, I remember one year they placed GIANT inflatable monsters with big arms and tentacles on top of prominent buildings in the city centre and they would flail around on the top of the buildings all day (go and look it up, its not scary I promise). 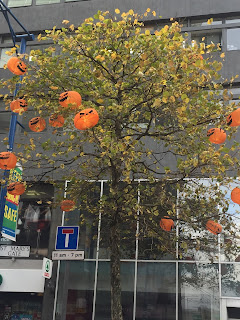 So, we finally made it to the museum! I’ll give you a bit of a backstory on the museum and what it has inside. The museum opened in 1983 on what used to be the grounds of the old Liverpool Road Railway Station, the council bought the building for the grand sum of £1 and opened the science and industry museum which features interactive activities based around easy-to-digest scientific facts as well as an almost fully operational cotton mill, with all its individual components (Manchester was the biggest manufacturers of cotton in the UK throughout the 1700 and 1800s) the museum also houses vehicles and locomotives from over the decades which you can touch, and some you can even venture inside!
You can imagine how much fun this is, but imagine how incredible it is for children to explore and learn, all for free! Now, the museum has a huge focus on technology and a so-called “green industrial revolution” that will focus on new innovations for humanity that won't risk the health of our planet.  The picture below is in the entrance hall of the museum, I'm not entirely sure what it is, I think it's just a brief overview of everything you can find in the museum but displayed in a whirlwind of screens and tech! 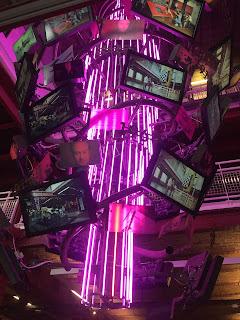 As we moved through the museum and came to the cotton industry section there were loads of interactive machines to play with that showed you how the cotton was loomed together to create fibres and materials! It was absolutely fascinating and we spent ages going from one machine to the next looking at how intricate each one was and how it all fit together, I took a little video of this one because I couldn’t get over how many individual spools of thread were coming together to create this fabric!
Next we headed upstairs to the interactive science bit I was talking about earlier, they also had a music-based exhibition all about a huge indie record label from the 90’s in Manchester called Factory Records, it was talking about how the label had changed the face of Manchester music and it looked very interesting for two music nerds like us but it was a bit out of our budget this time around. But, the museum is constantly putting on fascinating exhibitions throughout the entire year, so keep a look out for those if you visit as they can be booked in advance or paid for on the desk at the exhibition too!
This picture shows my favourite part of the hands-on science things in the museum, this car is sat on a brace (I don’t think that's what it's called but it's similar to when you go to a car wash and they get to drive onto the metal lines to keep your car in one straight line), the brace is connected to a big crank that you turn and this pushes the car up or down on the brace depending on which way you go, it's such a fun little attraction and obviously really cool to watch this heavy car move vertically on its own all because you’re turning a wheel. 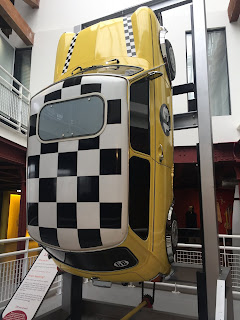 And that was it for our trip to the Science and Industry Museum! We had such a great time (as we always do) and it was fun to reminisce about the first time we can here together almost 4 years ago. A lot has changed in the museum since then but all for the better! They’re now focusing so strongly on making their museum and its exhibits more eco friendly that they’ve been given over £4 million in funding to “de-carbonise” the museum as well as over £6 million in funding to renovate the “Power Hall”, this is where all the old vehicles and locomotives are to make this Grade II listed building as sustainable as possible.
I’m really excited to see how the museum will develop over the next year (work is due to finish in 2022) and what changes will be made to protect the environment…I guess this means another trip back there!
Once we left the museum I found these roman ruins in a small park just over the road from the museum! This little park is called Castefield Urban Heritage Park and houses the ruins of a settlement that served as the entrance to Manchester from 79 AD (called Mamucium back then) at the time, there are also the ruins of the soldiers houses that surround the fort, it's completely free to venture into and there's plenty of bars, pubs and restaurants around to explore once you’re finished with the museum and roman ruins. 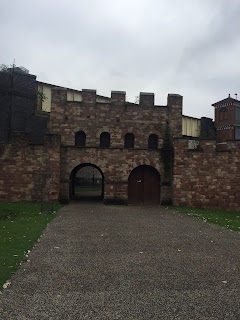 I had so much fun that day and it was made even better by the roman ruins because I didn't even know they were there, my partner didnt really know about them either and he’d been going into the city centre for over 20 years! If you do visit Manchester any time soon and are looking for something fun and affordable to do then I highly recommend the Museum of Science and Industry, it’ll keep you busy for a few hours and you learn so much in the process, oh, and maybe check out one of their exhibitions too if you can!
H x
Autumn Days Out Eco Friendly History Travel UK