I promised I’d be back with another world series recipe and I don’t break my promises! This time we’ve traveled far to Kuwait in the Middle East to make some tasty (and simple) flatbreads with a simple side dish to go with it. Khubz is actually popular all over the Middle East and is just the Arabic word for bread but this one refers to a pita/flatbread that can be dipped into curries or sliced open and filled with great things. I also read that pitas and flatbreads as everyday foods in the Middle East have dated back as far as 14,000 years ago, so this bread has had a lot of time to be loved by a lot of people, now it’s our turn.

I don’t think my attempt at khubz is as good as it could be, but it was the first attempt and I’ll try and explain it in a way where you might be able to make them better on the first try. I made a video for this one as I feel it’s quite easy to follow and didn't need a full write-up with pictures, so I’ll leave the video and full method down below!
Ingredients
Serves 2
1/2 tsp Yeast
100ml Lukewarm Water
1/4 tsp Salt
1/4 tsp Granulated Sugar
155g Bread Flour
1 tbsp Olive Oil
1 Red Onion, peeled and sliced
7-8 Chestnut Mushrooms, sliced
Handful of Fresh Spinach
Method 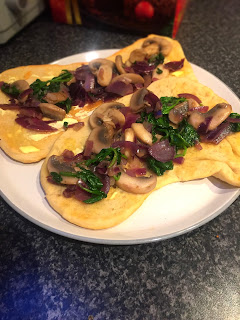 Ok, ok, so these weren’t as good as I’d hoped they’d be but it was still worth a go and I know I’ll have another go at some point. I think my main issue is I rolled them out far too thin so they didn't get a chance to puff up and be lovely and soft, they just crisped up in the oven and went more like a taco in the middle, I could have probably added some spices onto my mushrooms and onion or maybe a dipping sauce on the side to go with it all but I wanted to try the khubz on their own and see what would happen. I’m sure there are some Khubz professionals laughing at me right now but I don’t really care, I really did try and I know what to work on for next time! I think this is a very easy dish for someone who isn’t used to bread making and although the proving and resting time do make this quite a long recipe, I wouldn’t consider this one of the longer bread recipes, AND because of it’s simple ingredients, this Khubz is and always will be completely vegan!
On the flip side of that, I do think this bread would be really tasty with garlic butter brushed over the top, but that can be made vegan very easily too, so I think next time I would roll them out way smaller and leave them a bit thicker so they have more chance to puff up, make a dip to go with them and brush garlic butter onto them as soon as they come out the oven so they have a lovely soft and light texture but a delicious glaze of garlic butter topped with red onions and mushrooms!
That sounds really good to me and I can’t wait to try it again.
Next blog post I’ll be attempting to make my own Gnocchi from scratch with a goat's cheese and pesto sauce…wish me luck!
Only 9 days until Christmas!!!
H x
Baking Breakfast Easy Recipe Food Lunch Middle East Snacks Vegan Vegetarian World Series