on January 22, 2022
On Boxing Day, myself and my family took a short drive away from my parents' home to Avebury Stones in Wiltshire. These mystical stones are similar to Stonehenge, in that nobody is really sure the reason they’ve been placed but all we do know is, they’re over 6,000 years old! The stones date back to prehistoric times and the reason for them may be unknown but there are lots of guesses as to what it could be that range from a settlement to a burial ground or ancient religious site, whatever the reason, its fascinating! 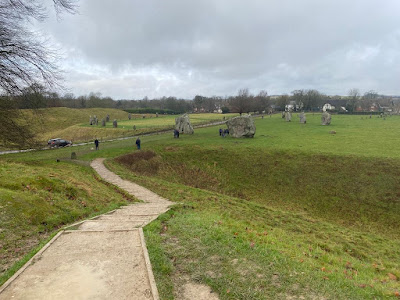 These are the outer lying stones and apparently, there are almost 100 stones in the original set-up, but obviously, over the course of 6,000 years some of those stones have been lost or destroyed but what is there is very clearly a circle that spans a HUGE area of ground. Whilst we were walking around, myself and my partner were trying to guess what the layout would have been and we’ve settled on a large opening/ gateway through the two massive stones off the left (and the fact that we were viewing it from the brow of the hill I think makes even more sense as this would have been the first thing anyone saw as they came over the hill), there is also a huge moat-type dip in front that we think may have been filled with water or possibly just a big, deep hole to separate the group from the outside and then off to the right at the top we thought this may have been a communal place/ religious building as it seems to be the biggest separate circle out of them all so this might be where everyone met up throughout the day…but obviously, we aren’t historians or archaeologists its just fun to imagine what it might have looked like (especially if there's no real answer!). 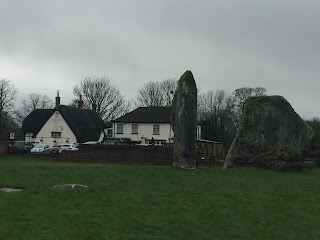 There were three separate fields in all that held these stones, and we ventured through two of them, in the picture above we were stood in the second field looking back to the pub where we parked, just a little bit of information, if you do park at the pub and then go in for any type of drink afterward, take the receipt of your parking ticket as they’ll take the price of that off a drink for you!
As we ventured through this field we saw some beautiful houses as well as an incredibly old tree that was cordoned off to protect it, it seemed pretty healthy but obviously, they want it to stand for as long as it can so remember to just admire but stay away. 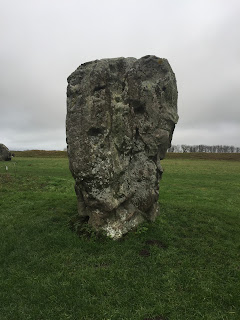 Now I’d thought I’d give you a close up on one of these beautiful stones, I hope you can see from the picture how incredible it is that a group of people were able to stand these stones up (or carve them into shapes from larger rocks) to STILL be standing where they are today. Because of this marvel, a lot of people come to pay their respects to these ancient ancestors as well as to the rocks themselves as some people (me included) believe that rock, stone, and wood are able to hold energy, so at 6,000 years old you can imagine the amount of energy that’s been stored from countless meetings with humans over the years. Some people feel so strongly about the stones they bring offerings or gifts such as candles, flowers or small pieces of jewelry to leave on top, inside or around the rocks. If there are any of you out there that call yourselves practicing witches, I hope you visit and put some protective spells on the stones and ground to keep them there as long as we can! 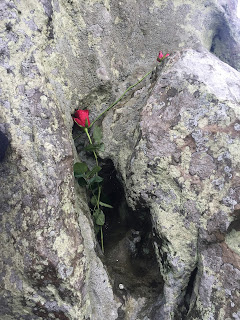 I know some of you will think what I just said was really silly, and that’s ok everybody is entitled to their own beliefs, especially if those beliefs are helping to protect ancient history. But I’ll move away from that now and show you something funny. As I said, we went with my parents, their dogs and my partner’s mum, the dogs were having a brilliant time wandering around the stones and the chalky ground…so much so that their pug Milo left his little paw print on my leg! We had to take a picture because I couldn’t stop laughing, I think it looks like a little monkey's hand! 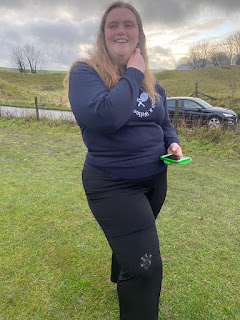 All in all, we had a brilliant time and I would definitely go back to see them again on a day where the ground wasn’t so muddy and slippery. I’ve always loved historical sights and getting out and about in this country visiting different buildings and ruins, so it’s great to have something so close to my family that we can all visit together. The surrounding area of Avebury and the stones are owned by The National Trust (more exciting news about them another time), and although you usually need to pay to visit National Trust sites, this one is free! If you haven’t been able to get out much in the last couple of years, and you don't live too far away from this amazing piece of history then I suggest you get yourself down there, have a nice drink in the pub afterward then hit up the cool looking gift shops!
H x
Adventure Christmas Days Out History Nature Travel UK Winter