Continuing on with our Patterson book binge, we're moving on to another Alex Cross novel released in 2007. I finished reading this book in November of last year and although it wasn't one of my favourite Alex Cross novels, I think the story is well worth telling! 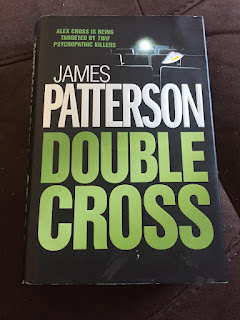 This book is anything but simple, as it follows Detective Alex Cross thinking he's finally settled down out of the police game when he's violently thrown back in to help try and find not one, but two murderers who may or may not be working together killing innocent people right in front of large groups of the general public, and then posting the killings online for the whole world to see!
Alex can't work out how these two vicious killers are connected, or what they're looking to gain from these horrific murders, but he knows that somehow he's connected, and for some reason, they're both after him!
As Alex faces the original murderer, he's thrown off course when an old enemy rears his head and forces Alex to work twice as hard to stop two psychopaths killing at the same time.
Like I said at the start, the book is exciting and the fact that obviously there are two killers that we have to try and identify and stop makes it all the more interesting BUT I found this book a little difficult to follow as the storyline flips from one killer to another and then back to Detective Alex Cross and his own family issues, it can be a little difficult to keep up with at times.
I definitely don't think this is Patterson's strongest work, but it was different and as someone who's trying to read everything he's ever published, I'm glad I ticked this off the list.
This book is still for anyone who loves a good 'who-dun-it', as well as gritty police crime novels or very gory crime novels too, basically, if you're into murder, mystery, and trickery, I'd give this a go!
I found this in a book donation at my local supermarket so I only paid 20p for it, but I have had a look online for you and seen it in a used condition for just over £3, but keep an eagle eye out for those donations book stands at any supermarket, hotel or anything like that, and of course, a place I've never mentioned before is your local library! As we move more online, libraries are struggling to keep up but if you've got spare time to go and visit your local one, I'm sure they've got plenty of James Patterson's (and other brilliant authors!) to keep you satisfied for a while.
***TW***
Obviously, as I mentioned, this book is very graphic and features a heavy depiction of injury, murder, and violence, I wouldn't give this book (or pretty much any other James Patterson novel) to anyone under the age of 18, or anyone who might be affected by the things I've mentioned earlier. Of course, these books are fictional and not based around anything that happened in real life that someone might be connected to, but they're meant to shock and appall so just be aware.
In the next post, we're heading into February and a Monthly Favourites!
H x