Sorry for the delay on the next book review, nothing serious I've just got a bit of a cold so it's been a bit difficult to find the energy to blog, but I'm here now! This review is on another James Patterson (no surprise there) called London Bridges, I was really interested when I first picked this book up as it's based in more locations than just the U.S.A, this is a global book and features major cities from all over the world, so I think it's more fun for the rest of us that don't live in America and finally feel included in this twisted world.

London Bridges starts in a small town in Nevada where an entire community is expected to evacuate in a matter of minutes with no explanation as to why, as the townspeople are led away they watch a monster bomb drop on their town and their homes and destroy everything they've ever known...with absolutely no reason why. There is one fatality but not from the bomb, the killing of an innocent man who refused to follow orders comes from the group of people claiming to be from The National Guard. But Detective Alex Cross soon finds out this was not The National Guard that was deployed that day, and two people were watching from a distance as this mega bomb exploded, so how did they know it was going to happen? 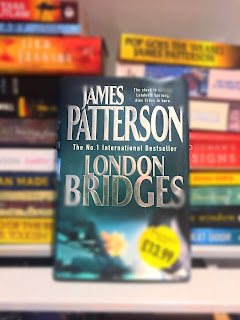 Of course, this book wouldn't be what it was without Alex Cross, who is now more tied up than ever with this mysterious act of domestic terrorism coupled with the fact he's trying to maintain a relationship with his youngest son; Alex Jr, as well as start a new relationship in San Francisco with a lady called Jamilla Hughes, but all of this comes grinding to a halt when he has to investigate the bomb in Nevada, threats from "The Wolf" and try to stop "The Weasel" from beginning a tirade of attacks across major cities in Europe that put the lives of hundreds of millions at risk!

I have to say that I loved this book, as you all know I've been reading a lot of James Patterson over the last few months so I'm getting used to his writing style but this one was so full of mystery, suspense (and a little romance!) that I think I read the book in about 5 days which is VERY speedy for me, haha! As I said at the start, it was refreshing to have different locations to read about aside from it just being centered in America, but the storyline was so fast-paced and edgy that I just couldn't stop reading, each page seemed to take you closer to the center of these horrible global terrorist threats, but then Patterson would remind you that Alex Cross is a human with a family and relationship to uphold, so you're ripped away from the action back into the turmoil of his family life and I began to think, how much stress can one person be under?!
The flip-flopping between his family life and work wasn't difficult to move between at all, Patterson is very good at letting situations breathe, so you aren't at a crucial moment and then taken away, you get the answer (or closer to the answer) before he changes to a different storyline, I like that about James Patterson's writing, I've seen a lot of authors who try that trick using lots of different characters with complex storylines and try to weave them together but usually I end up getting lost and confused. No one does it quite like James Patterson!
I found this book at a charity book donation and paid 20p for it, and I've noticed that James Patterson novels turn up quite a lot on donation bookshelves and in charity shops (I think it's because he's got such a huge catalogue), so keep an eye out for London Bridges because those of you with a mind for action, suspense, and a little human touch will LOVE this book!
In the next post, we're delving back into the World Series of food and traveling to Oman!
H x
Book Review Books Charity Charity Shop Buys Crime Thriller