I'm kicking off Valentine's Day 5 days early this year with these adorable heart-shaped American-style fluffy pancakes that just scream cuteness! I'm using my classic pancake recipe from a while ago because it never fails and it's so versatile whether you just want to make plain ones like I did to pair with golden syrup and fruit or if you want to add a filling inside like on the original recipe to make them extra special, they'll come out perfect either way!

I made a video to go with this including that classic song from Matilda, which is the only acceptable song choice when making pancakes any day of the year. I thought a video was the best choice as these pancakes are so easy to prepare and fry that you'll have them done in less than 20 mins, BUT unless you're a pancake wizard you're going to need one of these heart-shaped metal moulds for the frying pan (I felt metal was the safest option compared to any plastic moulds), but don't fear, I got mine in a set of two online for around £5 with free shipping!
Using the mould speeds up the process, giving you plenty of time to stuff pancakes in your face with your favourite person/ people.

135g Plain Flour
1 tsp Baking Powder
1/2 tsp Salt
2 tbsp Caster Sugar
130ml Milk
1 Egg, beaten
2 tbsp Butter, melted
Toppings:
1 tsp Golden Syrup
1 Banana, sliced
Method:
1. Put flour, baking powder, salt, and sugar in a jug then whisk together until combined. A jug is the easiest thing because we're going to need to pour the batter into our mould so anything with a pourer on the edge is fine.
2. In a mug whisk together the milk and egg before pouring in the butter and whisking until you have a golden mix.
3. Pour the wet mix into the dry and whisk until there are no lumps left, this should happen pretty fast but if it's too thick and pasty just pour in another 2-3 tbsp of milk then whisk again. Once whisked, leave to stand for 3-4 mins to thicken.
4. Heat a frying pan on low heat with 1 tsp of oil, place the heart-shaped mould onto the pan and pour enough batter to fill the mould 3/4 of the way up. Leave to fry for around 90 seconds before removing the mould and flipping the pancake over to fry the other side.
5. Repeat with the rest of your batter and you should end up with around 5-6 six thick pancakes.
6. Arrange the pancakes on a plate with some sliced banana, drizzle over the golden syrup then devour! 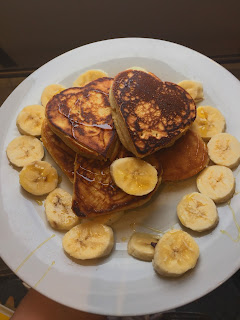 Without bigging myself up too much, I'm literally in love with these pancakes! I had a vision in mind of these adorable heart-shaped pancakes, surrounded by fruit and golden syrup/honey that would just create this perfect image of Valentine's Day to me, so I'm so proud that it came out looking exactly how I wanted them to on the first try. The mould was so easy to use and I found that once the pancakes cooked up the sides they would slide right out of the mould making them easier to flip, I would definitely use them again for way more than just pancakes so I'll have to think up some ideas!
I thought I'd focus on sweet things this year for Valentine's Day so this is recipe 1 of 2 where you can really showcase your baking skills for the ones you love...or show yourself some self-love this year! I know that Valentine's Day can be difficult for some and it brings up a lot of loneliness in others so I just want to say that Valentine's Day isn't just for couples, it's for celebrating the people that you love and appreciate most in your life, AND it's also very important to show yourself some love and patience on Valentine's Day as well, I hope you find the time to make these adorable pancakes and find some time to appreciate yourself and those around you just a little bit more than usual over the coming week.
We'll take a break from Valentine's mush in my next post as I attempt to make a vegan Thai Green Curry!
H x
Baking Breakfast dessert Easy Recipe Food Quick Recipe ValentinesDay Vegetarian Winter